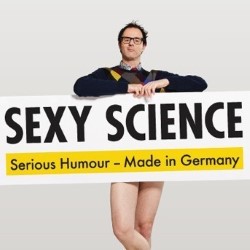 “Fortunately, in my home town of Frankfurt we have a very well-known English theatre. They gave me the chance to play the show on a regular basis so I could develop and improve the show.”

WHAT: “German comedians are like English cooks, sober Scotsmen or Texan democrats. And physicists aren’t funny at all. That may be true until you meet the father of German science comedy. Vince Ebert explains scientific facts using the fundamental laws of humour. Why is the sky blue? Why is the night black? Why shouldn’t we eat yellow snow? A witty and inspiring performance about skeptical thinking, fake news, the secret of German cars and the important question: do strippers in the southern hemisphere turn around the pole in the opposite direction?”

I was at the Fringe for the first time last year. A friend of mine, who is also a comedian, invited me to come over from Germany to perform in his mixed show. And I really enjoyed the atmosphere!!! So, I decided to come back with my science comedy show “Sexy Science. Serious Humour – Made in Germany”.

I’ve been working as a science comedian for almost 20 years in Germany but it has always been a big dream of mine to do an entire show in English. So, I sat down and wrote “Sexy Science”. Fortunately, in my home town of Frankfurt we have a very well-known English theatre. They gave me the chance to play the show on a regular basis so I could develop and improve the show.

Originally, I’m a certified physicist. In my shows I try to explain scientific facts with the fundamental laws of humour: Why is the sky blue? Why is the night black? Why shouldn’t we eat yellow snow? And of course, I’m willing to debunk the myth that Germans have no sense of humour. The first time I entered the lab of my German university I saw a sign: “Don´t look directly into the laser beam with your remaining eye.”

After the festival my German tour continues. But next year, I’m moving to NYC with my wife for a whole year! Maybe I’ll even make some contacts with Americans during the Fringe.

There’s such a huge offer of good shows and artists that I don’t want to pick just one. I can highly recommend stepping into a mixed show and let yourself be surprised. As a German I feel naturally obliged to my countrymen. Therefore I can recommend the show “Get On With It” from Henning Wehn.