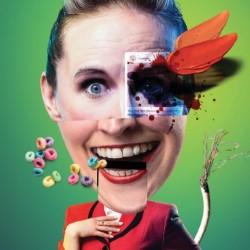 “When you say, “The Attention Economy” it sounds like something dry or theoretical but when you really delve into it, this is about how our minds are being manipulated and shaped by new technologies.”

WHAT: “Welcome to the stimulating world of Feed, where emotions are the currency, and your passions and fantasies will be indulged… for a price. After the sell-out success of The Marked, ‘a rollercoaster ride’ ***** (BritishTheatreGuide.info), and The Fantasist, ‘achingly beautiful… incredible stagework that will blow you away’ (Sunday Times), Témoin return, bringing their vibrant visual style to the world of clickbait culture, fake news and cyber gluttony. Feed is a co-production with The Lowry and The Everyman Cheltenham and is supported by Arts Council England and the Charles Irving Trust.”

This is our fourth show at the Fringe. Our past shows were NOBODY’S HOME, THE FANTASIST, and THE MARKED. We’ve been super lucky to have sell-out shows a few years running, and feel excited to have such a loyal audience base in Edinburgh who have a taste for our visual and physical style of theatre.

The biggest thing was being taken on by The Lowry as a supported company, and it’s thanks to them along with our long-time partner The Everyman Cheltenham that we have been able to really push the boundaries with FEED and build something zany and dark that is like nothing we’ve done before.

We’ve also been accepted into the Without Walls portfolio for companies producing outdoor work, which has meant that we’ve been able to scale-up some of our signature styles (like puppetry and clown) to the great outdoors. We’re currently building a show called “Routes” which involves a 20-foot tower and 10-foot puppets. We’re super excited to keep pushing into this new form and are interested in meeting / collaborating with circus artists so if you’re a circus company with an outdoor theatre idea please get in touch!

FEED is a devised show by Theatre Témoin that has been written by the company in collaboration with two stellar contributing playwrights – Eve Leigh and Erin Judge – along with a whole slew of mentors and engagement partners including Chris Thorpe, The Lowry Young Company, Stagedoor Learning, New Horizons, The Roundhouse Young Poets, Ovalhouse Young Associates, Anthony Anaxagorou, and Tristan Finn-Aiduenu. It’s a gritty and irreverent explosion of creative ideas tackling a very complex subject. When you say, “The Attention Economy” it sounds like something dry or theoretical but when you really delve into it, this is about how our minds are being manipulated and shaped by new technologies. It’s a subject that has its tendrils in addiction, desire, connection, and all that is worst and best in human beings, and until we understand it we won’t be able to face the greatest challenges facing us as a species. We think it’s one of the most important conversations for us to be having in our time.

FEED previewed at the Lowry in June, and will tour nationally and internationally in 2019.

Sh*tfaced Shakespeare. A) because they’re hilarious, but more importantly, B) because we stole one of their actresses for FEED. We’re constantly terrified they will drunkenly gate-crash our show and attempt to steal her back. Please go placate them.