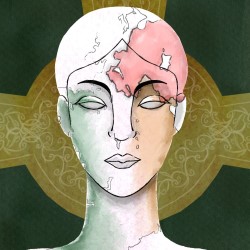 “It was a huge challenge dealing with a brand new Fringe in a brand new city for the first time (not being able to flyer in City of Manchester council area being a prime example) but it was exciting and ultimately paid off.”

WHAT: “Driven by faith to resurrect the IRA, Annie battles to bring her family the honour they deserve. A new Northern Irish adaptation of the myth by multi award-winning writer James Beagon. In the not too distant future, a hard-border Brexit has severed Ireland in two once and for all. Annie and her siblings will not let this stand. An unshakeable shadow lingers over their journey as faith, family and factions collide: the shadow of their father and the memory of the Disappeared. Inspired by Sophocles and other sources. ***** (Families Edinburgh). **** (FringeGuru.com). **** (BroadwayBaby.com).”

WHERE: Paradise in The Vault – The Vault (Venue 29)

This is the fifth successive year that Aulos has presented a production at the Edinburgh Fringe and we’re thrilled to be back at Paradise once more!

Last year, we presented “Gobland for the Goblins!”, which won Best Children’s Show at the Derek Awards, and in the years before that we produced “Lest We Forget”, “Women of the Mourning Fields” and “First Class” respectively.

Probably the biggest thing would have been in July, when we toured “Antigone na h’Éireann” not only to the Buxton Fringe (which we’ve done several times before) but also to the up-and-coming Greater Manchester Fringe for the first time.

It was a huge challenge dealing with a brand new Fringe in a brand new city for the first time (not being able to flyer in City of Manchester council area being a prime example) but it was exciting and ultimately paid off with a collection of very good reviews which we otherwise wouldn’t have.

“Antigone na h’Éireann” is a brand new take on the Greek myth and more than a simple adaptation of the famous Sophocles play. Instead, it’s a completely new script which draws its inspiration not only from the Sophocles but also from other classical writers who told the story in a different way.

It’s set in a hypothetical post-Brexit Northern Ireland in 2019, where a “hard border” has resulted from the UK leaving the EU and the island of Ireland is essentially severed in two. But Brexit isn’t really the focus of the play; instead, our play is about faith and family. Annie (our modern Antigone) is a devout Catholic in our version of the story, and the play deals with the conflict between her religious and political ideals, as well as the looming shadow that the legacy of her father casts.

As previously mentioned, we’ve just come off the back of a week’s run at the Buxton Fringe and Greater Manchester Fringe, where we picked up an award nomination and several excellent reviews. There’s talk of performing it after the Edinburgh Fringe finishes but it’s very much hypothetical at this stage.

We have loads to recommend! There’s so much excellent stuff happening this Fringe and a lot of it is from Edinburgh. The shows that immediately come to mind are:

There are more but that’s a good start to keep you going for a while!

A cheeky bit of self-promotion – we’re also doing a second show “Shakespeare Catalysts” from 20-26th at Espionage as part of the Free Festival, but we’ll do a second interview for that one!