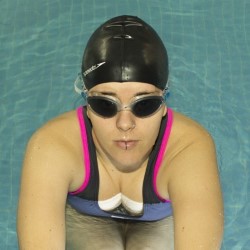 “I’m really excited to get more time in the city and discover more good people, more good food and lots of creativity.”

WHAT: “Q: What happens when you move a 12-year-old from Basingstoke to Zambia? A: She swims. Katrina weaves together poetry, swimming lessons and some 00’s RnB in a mesmerising coming-of-age memoir about crossing borders. Learn to butterfly, learn how to speak to boys, learn to fit into your skin. And remember to ‘breathe, 2, 3, 4…’ Award-nominated at Brighton Fringe. ‘Katrina’s poetic prowess is truly gold-medal material’ (The Cornishman).”

As a Fringe performer yes, although I’ve been several times before to visit and love it! One trip involved improvised dance (with flags) at Arthur’s Seat, on the Royal Mile and in the Castle grounds. Other trips mainly revolved around good people and good food, and last year: the Fringe. So I’m really excited to get more time in the city and discover more good people, more good food and lots of creativity.

Ooooh… I became an aunty, moved into a lovely flat right by the sea, and signed up for Edinburgh!

I wrote, performed and produced “Individual Medley”, which debuted at Brighton Fringe 2017. It was a bit of a solo-endeavour, an experiment post-turning-30 to see if I could give this creative thing a proper go instead of letting life be overtaken by ‘proper’ jobs with barely time to perform poetry now and again. That said, through performing the show and developing it over the past year I’ve met and worked with some brilliant women: Lauren Gauge, Jesse Payne, Rosie Powell, The Junkyard Dogs ladies (award-winning Brighton venue).

Since Brighton, “Individual Medley” has gone to Penzance Litfest, Hove Grown and Swindon Fringe. In the future it would be awesome to perform it in or next to a swimming pool!

Pecho Mama’s “Medea Electronica”, which is a lot darker but very moving with a stunning live soundtrack. Rhum & Clay’s “Mistero Buffo” because they never disappoint (and I did drama A-level with Julian and Nick and they’re ace). Kinky Theatre’s “Love like 90’s RnB” if you didn’t get enough TLC, or “The Mariner” for more poetry and water. I’m looking forward to seeing Harry & Chris and Flo & Joan for musical comedy genius. And for more spoken word shows check out Robert Garnham, Fay Roberts and Koko Brown.