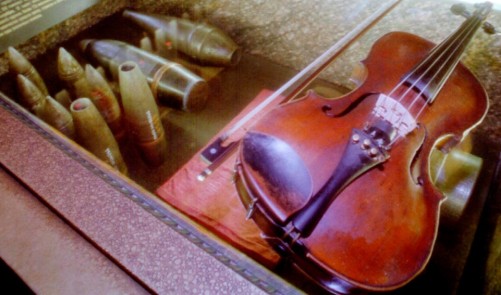 At the Museum of the Defense and Siege of Leningrad.
Photo credit: TASS/Yury Belinsky

“This orchestra has soul”

It became very clear to me on a visit to St Petersburg in February last year ( … temperature minus 20C) that the St Petersburg Philharmonic (which begat the Petrograd Philharmonic, which begat the Leningrad Philharmonic, which begat the St Petersburg Philharmonic for the second time), Russia’s oldest orchestra, is not just an orchestra or a magnificent symbol of Russian culture, but an entity that goes to the very soul of the St Petersburgers themselves.  For in the Great Patriotic War (World War Two to you and me) the citizens of this great city were under siege for 872 days and reduced at one stage to eating cardboard and glue – after the rats ran out.  Tannoys were fixed around the city to relay the playing of the orchestra to maintain morale, usually Shostakovich’s 7th Symphony (‘The Leningrad’).  The orchestra were given extra rations to give them the strength to play.  Some died at their desks.  The siege ended on 27th January 1944, 75 years to the day of this concert.

I doubt if any playing in the orchestra on Sunday were alive then, but of course their parents would have been, and they would have known.  This orchestra has soul.

There is also a poignant connection between Eastern Scotland and Western Russia, as anyone who has read Eugenie Fraser’s The House by the Dvina knows, although this was principally trade between Dundee and Archangel.  However, there was terrific snob value in nineteenth century aristocratic St Petersburg houses in having an Edinburgh Nanny, just read Harvey Pitcher’s When Miss Emmie was in Russia.

So it was touching that the St Petersburg Philharmonic chose to start their UK tour in Edinburgh, and we got a full on performance.  This was no warm up venue.

The Usher Hall’s programme of Sunday Classics featuring international orchestras is an unashamed and thoroughly enjoyable crowd pleaser. The programmes are highly accessible if not populist.  Why not? The place was packed.  Nobody plays like a Russian orchestra, and nobody plays Russian music like a Russian orchestra, and our first item was the biggest lollipop of them all, Rachmaninov’s Piano Concerto No 2 in C minor, Op. 18.  It was played superbly, with not the slightest hint of schmaltz or vulgarity.  Freddy Kempf set the tone from the beginning by making every one of the eight bell like introductory chords sound different.  His was a very intelligent, totally clear interpretation that let the music speak for itself.  The orchestra’s tone was rich and warm, conductor Vassily Sinaisky kept soloist and band in balance, keeping the magnificent brass in check and letting the strings soar, with ample support from woodwind and percussion.  This was a thoroughly rehearsed yet utterly fresh and committed rendition of a well known work that did not tire through familiarity, a lesson to orchestras everywhere.

The ultra cool Freddy Kempf treated us to a substantive jazz encore.  The music writer always wants to know what the encore is, but even when announced can rarely hear.  Anyway, Freddy said that “It was written by a Russian Ukrainian whom you won’t have heard of”.

To my surprise the second part of the programmes was not a Russian composer but Mahler, albeit the very accessible 4th Symphony.  The orchestra went into the opening without catching its breath, beautiful light flute and string phrasing, a fast rhythm quickly developed with a definite sense of swing.  Immediately we had the confidence that we would be in for a fine performance, and we were.  The horns came in strong but beautifully measured, the four flutes, no less, pleasingly fluent and inducing a sense almost of easy listening.  Knowing of Mahler’s love of scoring for banks of the same instrument (he has been known to write for eight horns) I was impressed to see and hear no less than ten double basses playing pizzicato in the third movement Ruhevoll (Restful). An extraordinary experience.

Come the final movement Sehr behaglich (at ease) soprano Anna Devin emerged from where she had been patiently sitting in the midst of the orchestra to take front stage.  I am always slightly disappointed when soloists have to have their music with them, and Anna’s relative lack of projection at first may have had something to do with this.  Nonetheless her voice was pure, pleasing and if not drowned by the huge orchestra would have soared a little more, and Sinaisky’s baton could have helped her a little more in bringing the necessary balance about.

The audience was totally engaged even if not as sophisticated as those of the evening kind – too many whoops in the applause.  So I was absolutely delighted that they not only restricted their coughing at this difficult time of the year but held their applause for what seemed like a lifetime as the conductor’s baton held the silence for a satisfyingly and deservedly long interval before the house came crashing down with enthusiastic clapping and cheering.

After several returns to the rostrum, we were treated to an engaging encore of close harmonied late nineteenth century orchestral music, or so I guess.  I wish I knew, but, hey, who cares about names, it was a beautiful way to end this gorgeous Sunday afternoon occasion.

Go to Edinburgh49 at the Usher Hall .