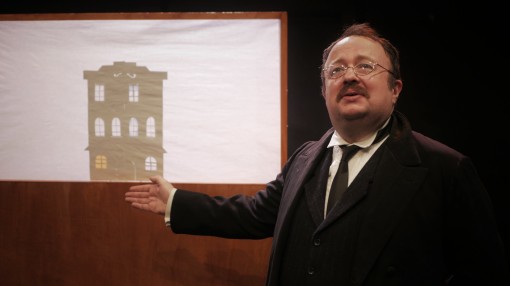 It fits that A Note of Explanation, a work-in-progress preview, is part of the third Formation Festival at Assembly Roxy. This adaptation of a children’s story by Vita Sackville-West is coming together rather well.

Some Kind of Theatre could argue that their 45 minute production is in kit form: neatly engineered, quick to put up, and soon to be nicely habitable. It is, after all, based upon a very small book in the library of a doll’s house. Yes, a priceless doll’s house with imperial foundations, but director and script adaptor, Emily Ingram, has carefully and respectfully remodelled A Note of Explanation (1924) for our declining and more anxious, times. I believe Sackville-West would applaud, whilst Edwin Lutyens, architect, might question what on earth we mean by ‘modernizing’. However, Lutyens is tutored and charmed by a bright and perky fairy, so all is to the good.

Quercus, ageless sprite of the house, has ‘memoirs’ to enact from standing in the wings of story time. She is forever young and capable (and Scottish) and her tales of Cinderella, the Shellycoat, Bluebeard, and Jack and the Beanstalk, are cheery, cheeky, variants upon the originals. Nothing too scary here, only a silly goose. Cheery but helpful too, as each has an ecological edge; perhaps not as keen as the woodcutter’s axe but good and pronounced all the same. When Quercus accuses Lutyens of imprisoning her within the skeleton of her oak tree the royal architect is truly sorry. Fortunately there is one magic acorn left ….

Ably performed by a cast of three – Gillian Goupillot, as Quercus; Imogen Reiter; and Justin Skelton, as Edwin Lutyens – with support from puppets of tree(s), agile squirrels and a carriage, A Note of Explanation is a lively and intelligent children’s show in the making.

Robert Graves’ poem, The Stake, in ‘Poems: abridged for Dolls and Princes’, 1922, in the library of Queen Mary’s Doll House.  Haunted, but has an honest oak tree at its centre.)

Enjoy Some Kind of Theatre

Visit Edinburgh49 at the Assembly Roxy