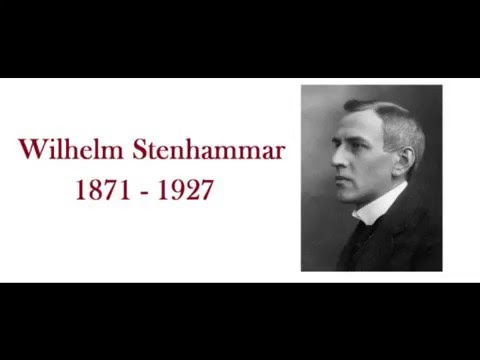 “A very well-known piece in Sweden……..which is not saying a lot”

The Queen’s Hall claque are a cheerful bunch, if in the main somewhat elderly, and you know they will address almost anything put in front of them in a good spirit.  Thursday’s concert gave them such a challenge: obscure Stravinsky, even more obscure Stenhammar, with the reward of some straight down the line tinkly Mozart as the filling in the sandwich.

Guest conductor on the night was the personable Andrew Manze, Beckenham born (your writer’s home for 20 years) and Cambridge educated, his pedigree is just right for this type of music, which he interprets with considerable enthusiasm.  Formerly Associate Director of the Academy of Ancient Music and Artistic Director of the English Concert he has been since 2014 Chief Conductor of the NDR Radiophilharmomie Hannover and has just had his contract renewed until 2021.  England’s loss is Germany’s gain.

The Stravinsky that opened the programme, Concerto in D, was atypical of the composer’s style and perhaps could have been more properly described as a Sinfonia for Strings.  Bartok, Britten, Tippett and others have used the description Concerto when there is no solo instrument and I consider it misleading.  By no means a great work, it provided an entertaining start to the evening, with an exciting, taut, sparse start ending with pizzicato double bass.  The second movement Arioso-Andantino actually achieved a most un-Stravinsky like legato along with an uninterrupted melodic line.

Next up was the fabulous Francesco Piemontesi with Mozart’s Piano Concerto no 19 in F, K459.  This was the last of six piano concertos that Mozart wrote in 1784 and stands at the crossroads with the great works from No. 21 onwards.  Simple in construction and in particular in the opening movement, the final Allegro “is one of Mozart’s most miraculous movements – the balance between the extreme light-heartedness of the melodies and the formal complexity of the motifs and the counterpoint being simply astounding”. (I do not usually use Wikipedia as a source but cannot better their description on this occasion).  The orchestra opened with bright, clear intonation from the strings, soon supported by wind and brass with a strict tempo before the soloist entered.  This was a lively, free spirited performance with some lovely, beautifully expressed playing of great fluency; piano and orchestra alike.

For those of us who felt a little cheated from not hearing the more mature No. 27 in B flat K595, which the band had played at St Andrews the night before, we were mollified by an extended encore from both soloist and orchestra of a Mozart Rondo in A (partially orchestrated by Charles Mackerras) which sent us off into the interval with a joyful disposition.

Andrew Manze spoke to us as we reassembled for part two telling us, tongue in cheek, that the Stenhammar Serenade in F was “a very well-known piece in Sweden……..which is not saying a lot…. Enjoy it, because it might be the only time you hear it!  Mind you, how many of you had heard the Stravinsky?”  Not so, there is an excellent recording by the Gothenburg Symphony Orchestra that is also streamed by Tidal, and of the Stravinsky by the New Orchestral Symphony Orchestra of Boston, recorded in 1954.  How’s that for Reader Service?

But what of the music?  The opening reminded me of the sort of film music you hear for Ealing Comedies and ’50s British cinema, but later on the work developed into something more substantive.  It was a well-orchestrated 40-minute tableaux, well scored with plenty of scope for woodwind and brass, with just a touch of neighbour Sibelius.  Clearly a difficult piece to play, the orchestra are to be congratulated in portraying the work with such competence, fluency and enthusiasm.

Go to the SCO, the Scottish Chamber Orchestra