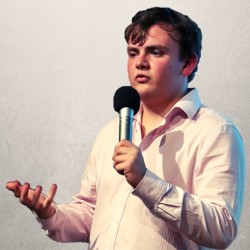 “Then last year, I made the step up to a full month’s run with my second show ‘Coming of Age’. It was a lot tougher, and about 15 days in I really started to feel it.”

WHAT: “What do you do when life comes to a crossroads? Write a show about it, of course! At 19 years old, Andrew White can’t help but question his next steps: should he keep slogging it out on the stand-up circuit? Or should he leave it all behind for further education? Is this truly the Retirement Tour? A brand-new comedy show from ‘one of the most talked about rising star comedians’ (EssexMagazine.co.uk). Weighing up his future, Andrew takes a hilarious look at the value of comedy vs the benefits of university. ‘Not to be missed’ (Daily Record).”

This is my fourth year and third solo show up at the Fringe. I didn’t take any show up in my first visit to Edinburgh, but it made such an impact. My parents and I went on a week long trip in 2016 after my GCSEs and I just fell in love. I said to myself on that trip that I’d be up every year from then on, and so far, I’ve kept that promise.

In 2017 I went up for two weeks with my debut hour ‘It Was Funnier In My Head’, and had a great time. It was nice to dip my toe in the waters doing that shorter run, and I made a lot of good friends out flyering and seeing other shows.

Then last year, I made the step up to a full month’s run with my second show ‘Coming of Age’. It was a lot tougher, and about 15 days in I really started to feel it. My first two weeks were amazing, and I spent a lot of time with other comedians, making new connections, and just taking it all in. Unfortunately, a lot of my friends were only doing short runs and I was left on my own for a week before some family came up for the last few days.

It was a steep learning curve, but I still really enjoyed it, and was really lucky with audiences across the month.

Since last year, probably the biggest thing that’s happened is that I went full-time with comedy.

It’s greatly subsidised by living with my parents, but still, I can’t believe I’m able to do nothing but stand-up and gig so much. I’m really lucky and extremely grateful.

I also have an offer for university to study Linguistics at Cardiff. So that’s a fairly big event in my life as well, which ultimately forms the basis for my new show…

Retirement Tour is a stand-up show that weighs up the benefits of university vs the creative pull of pursuing comedy full-time.
With a gap year, and indeed, until the end of the Fringe to decide, can I bare to walk away from so many gigs for higher education? Is there any value in doing comedy anyway? Is it a healthy career? Was it appropriate to come out to my parents on stage as part of joke?

The show looks at all these questions, and is quite literally my life as I’m living it. It’s been hard to write at times, because I’m still unsure in reality, but it’s also been a useful way of talking my thoughts through. Comedy is a great way to process life I find, and it is cathartic to turn big dilemmas into comedy.
N/B though, it’s not just live therapy though, it is actually funny, and I try and keep it as relatable and accessible as possible, despite the rather unique position of my conflict.

I’ve been previewing all over the country at various festivals, theatres, and comedy clubs, and it’s starting to come together quite nicely. I’m excited to showcase the finished product in Edinburgh.

There’s so so much. I think my top 7 (because I couldn’t whittle down to 5) would be:
– Which Princess Are You? by Sunjai Arif
– Troy Hawke: Tiles of the Unexpected
– Laura Lexx: Knee Jerk
– Josh Berry: Who Does He Think He Is?
– Joe Wells Doesn’t Want to Do Political Comedy Anymore!
– Harriet Braine: Les Admirables
– George Rigden: Spooning with Uri