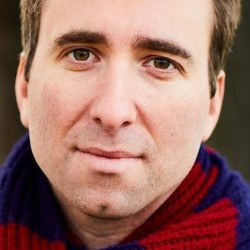 “I’d like to turn it into a documentary or a film of some sort and maybe tour the show as well.”

WHO: Joe Bor, Writer and performer

WHAT: “Award-winning comedian Joe Bor retells the story of the friendship between his grandad (world-renowned town planner Walter Bor) and his grandad’s best friend (world-renowned comedy actor Herbert Lom) and their journey from Nazi-occupied Czechoslovakia to the UK.”

This is probably my tenth show at the fringe. I first performed in 2005 as part of a sketch group, I have performed almost every year since then, in a sketch group or as a solo performer. I haven’t been up for 5 years though.

I was in a show called ‘Ultimate Bucket List’ for BuzzFeed, where I got to do a lot of things that were on my Bucket List, it really pushed me out of my comfort zone. I spend most of the show being scared. But looking back, it was pretty amazing.

I have been working on the show for a few years, writing and performing it around the country, testing the material. It’s based on an unpublished autobiography that my grandad wrote. So I suppose he wrote some of it. It’s also based on interviews with family members. So I’d like to turn it into a documentary or a film of some sort and maybe tour the show as well.

I would recommend Luke McQueen and Nick Helm if they want to see something a bit different. Ian Smith always makes me laugh too.