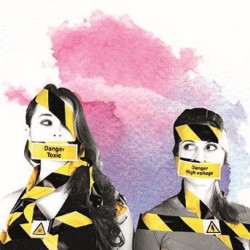 ” It truly is challenging working with your creative partner in a different country … oh and then there is that little thing called adulting that tends to take up a lot of your time.”

WHO: Xiomara Meyer and Tamalynne Grant, Writer and director

WHAT: “A struggling movie actress and an aspiring horror writer are on the very brink of success – each just a compromise away. Jessica has been asked to upgrade her sex appeal. Olivia’s book must adopt a male pseudonym. Inspired by real events, this is a comedy (with the occasional song) about the insanity of male-dominated creative industries and the one conundrum every artist will undoubtedly face: the choice to forfeit artistic integrity in the name of success, or to stay true to their art but miss out on the opportunity of a lifetime.”

X: I was here in 2016, as executive producer for the Impi Theatre Company, but this time around I come as a performer, too, with a company I co-founded, so it’s not as intimidating but still quite overwhelming. I have a somewhat better grip of what’s going on, but because the show has so many personal facets too it I feel that the stakes are higher. The Fringe grows every year, so I’m both super excited but also not sure what to expect. Luckily we have a spectacular team coming along with us (Stefanie Matei, Charli Weston and Sylvie Taniguchi) so I’m really thrilled to bring the show to Edinburgh.

T: This will be my first time performing at the Fringe. I think if I was purely coming as an actor then I wouldn’t be so nervous. However, since I also directed the show I feel the extra pressure. I’ve always wanted to perform at the Fringe and I’m extremely grateful to share this experience with my childhood best friend (as cliché as that sounds) but it’s true. There’s also something magical about going back to the roots, having my family come see us perform there. It’s all very magical.

You mean since the last Fringe? Well, our lives have been consumed by this show since June 2018, so we’ve just been working on polishing it to be the best it can be. It’s not easy when half the company is in London and the other in Vienna, but we’re stubborn and determined and we make it work. We’re also quite adamant about taking on challenges: the more we revised each draft of the script the more we kept pursuing the “what if…” question and actually going through with the new ideas. We have since worked with an internationally acclaimed musician, two renowned composers, recorded in studios both in Vienna and London, filmed a professional trailer with an up-and-coming director, and made many connections to people in various areas of the arts.

T: I can only add on to what Xiomara just said. It truly is challenging working with your creative partner in a different country: Skype sometimes doesn’t want to work properly so one loses 2 hours just trying to sort out simple technical issues; files get lost over Dropbox; editing the script is a never-ending story, oh and then there is that little thing called adulting that tends to take up a lot of your time. It’s been an intense year full of preparations and planning, improvising, adapting and overcoming plans that failed. If anything I think this past year has helped us grow professionally as artists and has fully prepared us for this year’s event.

X: The show was written by myself and co-written by Tamalynne.

T: In turn I directed and Xiomara co-directed.

T: It’s been great working with the girls, they’ve been supporting us 100%, it’s nice to assemble a team who believe in your project just as much as you do. They’ve helped us gain more attention on social media, which was a huge plus! The idea for the story sprung from a monologue written by myself during my final year (we had to produce a 20-minute show) at my conservatory in Austria. The monologue relates to the struggles and constraints of being a woman in the acting industry, something I experienced first-hand at the conservatory, which is why I’m very passionate about these themes and feel very close to them.

X: At the same time, I was living in London and going through my own array of artistic shortcomings in the literary world, not to mention major setbacks in my personal life. Apart from being frustrated artists, Tamalynne and I are also frustrated millennials, so we shared a fierce passion for mutual topics. We met in high school and have known each other for over a decade, so working together is second nature to us.

T: We are like an old married couple when it comes to working together.

X: Yeah, and there were a few times during the rehearsal process when I’m sure both of us wanted to file for divorce! Anyway, we wanted to make the script personal, but also relatable. It began as a rant, but quickly turned into an exploration far beyond being a female in the industry – it’s also about the importance of truthful art in an age where everything seems fabricated for the consumer’s pleasure only. I know it all sounds like a deep dark topic (and it is), but believe it or not The Struggling Life of an Artist is a comedy. The great majority, at least.

T: The play really comes from the heart. We wanted to make the play a comedy because we believe that is the best way to approach an audience. People are generally far more open and accepting to sensitive themes as stated above when you make them laugh. I don’t think Xiomara and I realized how affected we’d feel, though. Not only were we trying to convey a message but we also did a lot of self-exploration: where our strengths lie and what insecurities we still have, all which ultimately shows itself in the characters we portray. This show has been a very interesting journey as an actor as well.

X: We recently had a two-night open house preview in Vienna, and the audience reception was superb. We don’t have time to do previews anywhere else before the Fringe, but we would love to do a European tour in the future!

T: We got a lot of positive feedback for our show, which was very humbling. We were so nervous, and all the hard work paid off. People laughed, they cried, they cheered. One could truly feel the audience go on the journey with us. We would love to bring the show back to Vienna (many requested us to do so) and anywhere else in Europe!

The South Afreakins at The Space on the Mile, Where to Belong at Summerhall, Under The Floorboards at PQA Venues.