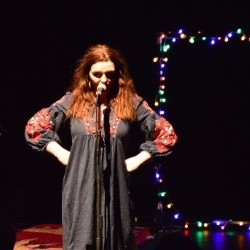 “Ane City is our company’s first project and we’ll be premiering it at Edinburgh Festival which is incredibly exciting for us both.”

WHAT: “Tay has returned to her hometown of Dundee for a summer of relaxation, drinking and self-discovery. But first, she has to get through a night out with her friends, hitting the streets of Dundee. From tacky pubs with seedy bouncers to revelations on the McManus steps with Rabbie Burns, Tay attempts to find herself in the city of Dundee. A theatrical, poetic one-woman show that combines elements of Scots language, storytelling, song and comedy. ART Award Winner 2019.”

TAY: We’ve been to Edinburgh a few times being quite local, however this is actually our second time performing at the Festival Fringe. In 2017, we took a Scots adaptation of Lysistrata for two nights at The Arthur Conan Doyle Centre.

CAL: We did it for the experience of taking a show to Edinburgh really. Performing at the Fringe is a world away from attending. The show was a feminist retelling of Lysistrata, set in a Glasgow pub, with songs. But Ane City is our first show as Elfie Picket Theatre.

CAL: Unfortunately, we weren’t able to do any festivals last year as we were both completing Masters Degrees at Glasgow University, and all of our deadlines fell in August. However, we won the Assembly Roxy Theatre Award for Ane City and are just off the back of previewing the show at Prague Fringe Festival.

TAY: Which was such a fun and exciting festival to preview our first show at. We got on really well, and had some great feedback from audiences; it’s made us even more excited about bringing the show to Edinburgh.

CAL: I guess the biggest thing that’s happened to us since last year is that we both gained Masters Degrees and started Elife Picket as our own theatre company.

CAL: The production is completely ours; Taylor wrote it and is performing the piece, and I’m the director and dramaturg.

TAY: We’ve been working together on it since 2018. We’ve been together as a couple for four years and our company Elfie Picket currently consists of just the two of us.

CAL: We created Elfie Picket last year with the focus of creating work relevant to a younger audience (16+) with a focus on Scots language.

TAY: Ane City is our company’s first project and we’ll be premiering it at Edinburgh Festival which is incredibly exciting for us both.

CAL: You’ll find us performing in Assembly Roxy Downstairs with the piece as we won the venue’s 2019 ART Award for new writing.