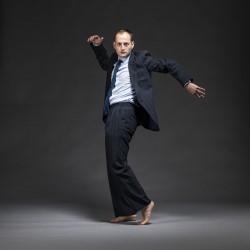 “A comedy about male ego, expressing yourself and dancing.”

WHAT: “A story of a man who decides to be a dancer. Daniel’s living the patriarchal dream, everything that should bring happiness. It hasn’t. He discovers what he really wants, but is it what he needs? A comedy about male ego and dancing by Ed Eales-White. Writer/performer of Clever Peter and Bucket. As seen in National Treasure (Channel 4), The Crown (Netflix) and Olivier Award-winning Rotterdam (Trafalgar Studios/NYC). ‘Perfectly embodies the play’s balance between brisk humour and sensitivity’ (Evening Standard, for Olivier Award-winning play Rotterdam). ‘Eales-White the foppish, earnest auteur’ (Guardian).”

The show is called Who Is Daniel King, It’s the story of a man who decides to be a dancer. A comedy about male ego, expressing yourself and dancing. I wrote it and am producing it as well. The show will premier at this years Edinburgh Fringe and hope there will be plenty of life beyond the fringe with future productions in different parts of the UK and perhaps even beyond.