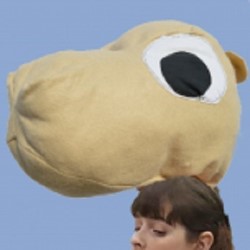 “I wanted to raise the bar and make a comic opera that wasn’t about medieval commedia dell’arte tropes.”

WHAT: “Love! Death! And a pantomime camel! After extensive audience research, we listed the 47 things people demanded in operas and shoehorned them into this show. Macbeth enters, riding a camel. Macbeth and the camel are deeply in love – but when Lady Macbeth finds out, magic, murder and a mad scene ensue. With drag queens, ballet scenes and social relevance (but not forcing ideas down your throat), this hip-hop foxtrot operatic sketch comedy show is (technically) The Perfect Opera. Winner of the Francis Chagrin Award from the Sound and Music Foundation.”

WHERE: Paradise in The Vault – The Annexe (Venue 29)

I’ve been coming since 2013, when I had my first ever directing experience with a student sketch comedy show. And another one the year after. Both were… pretty much everything you expect student sketch comedy at Edinburgh to be. But I had a wonderful time seeing everything, and got a bit hooked on the Fringe buzz. So in 2015 I came with a show I co-wrote and co-directed with Charley Ipsen – At The Break Of Dawn, which toured around Germany and got nominated for that year’s Amnesty International Freedom of Expression Award. After that, I decided to take a few years out until I had a really amazing show to bring into the Fringe madness.

I’m pretty sure the rest of the company hasn’t done Edinburgh before – I’m excited about sharing something so amazing with them all.

Ooh, that’s a tough one. Personally, I’d say speaking at my first academic conference – Shakespeare and Co. in York, talking about how shoehorning a pantomime camel into a very loose adaptation of Macbeth is definitely justified by Shakespeare’s role as a shared myth in our society, and not just something I thought was funny. I got very nervous and gabbled through the paper – but it’s the first time I’ve ever presented to academics, so I’m pleased to have had my first taste – next time, it’ll be better!

It came from two frustrations.

One was a personal frustration about people saying ‘oh, you should include [love/death/a pre-existing story/a more original story…] in your next opera’ and decided that I’d shove them all into one ‘perfect’ opera.

The other was a frustration that in my comedy work, people viewed ‘I laughed once every five minutes’ as a devastating criticism, but my opera friends saw it as high praise for operatic comedy. I wanted to raise the bar and make a comic opera that wasn’t about medieval commedia dell’arte tropes – there’s been a lot of recent changes.

Once the libretto was done, I brought Peter Davis (our composer) onboard, and got together a team of fantastic singers who were excited by the project and doing a very silly sketch comedy opera. They’re all great at comedy – not just for opera singers, but just as comedians in their own right.

We’re working with Virtually Opera – they’re devoted to fusion opera, mixing it with clowning, YouTube videos, and vampire B-movies and tabletop roleplaying games. All to try and make it open to more people.

Edinburgh’s our first run – we had a workshop performance last year, and will have a London preview at the Tête à Tête Festival. After that, we’re hoping that our Edinburgh shows will make people excited enough about the show to pick it up for a tour – fingers crossed!

It’s so hard to say before getting to Edinburgh! (I haven’t yet had time to read the whole programme) But:

If they love opera-y comedy where you’re there to have a good time, not contemplate sublime beauty and titter politely, you should definitely go and see Madame Chandelier’s Guide To The Opera. She’s fantastic, and we both share an ideal of opera that’s fun and for everyone, not something terribly intellectual you need to be super-educated to enjoy.

More generally, I love the Creative Martyrs’ brand of musical satire and comedy – I discovered that magnificent pair on my first time at the Fringe, and it really stood out. Definitely an influence on how I do musical comedy.

Adventurers Wanted do a great job boosting accessibility through their unique mix of tabletop gaming and theatre, which swings delightfully between silly comedy and some of the most beautiful character-led drama you’ll see at the Fringe. They really set the benchmark for me in terms of ‘shows should be accessible by default,’ and making me try much harder in my work since seeing theirs.

And if you want to see some opera, I’m hoping to see La Voix Humaine – it’s an amazing Poulenc opera I’ve never seen live, and has a few showings as part of the Fringe. I’m gutted to be missing the opera at the International Festival – but Eugene Onegin’s a good one for people who’ve never seen an opera before, and want to have a good time watching something beautiful.