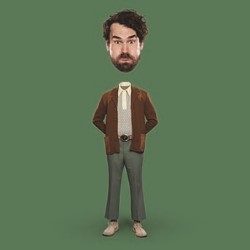 “I found a fiver in some trousers I hadn’t worn in a while.”

WHAT: “Disappear down the rabbit hole of a fool’s mind. Marvel at imaginative, logic-defying, left-field ideas spoken from an award-winning comedians mouth! ‘An enticing, dizzying prospect, who whips through a welter of daft, Harry Hill-like ideas and diversions and chucks characters around with the agility of the Pajama Men’ (Independent). ‘An impressive knack for both observational wit and quirky flights of fancy’ (Evening Standard). ‘Eclectic mix of proper gags, gleeful flights of fancy and enjoyable awkwardness’ (BritishComedyGuide.info).”

I’ve been coming up to the fringe since 2006 in various forms. I’ve performed in various mixed bill stand-up shows, written/performed four solo standup shows and five sketch shows as my sketch double act Short & Curly. Bit of a veteran me.

Short & Curly got nominated for best character, sketch and improv in the Chortle awards. Also, I found a fiver in some trousers I hadn’t worn in a while.

I wrote it, and I’m self producing it. Its got various bits of stand-up that I’ve been playing with since my last solo show, but really its all started to come together as a show after I put all the ideas together for a work in progress at Machfest 2019.

I suggest people go and see James Mcnicholas, he’s branching out as a solo act after having been a part of the sketch group Beasts for many years and he’s got an intriguing concept about being a boxer who has never fought. Also, my pals Jessica Fostekew and Laura Lexx always bring excellent shows, and will no doubt be out -standing. Also, I’ve been sharing previews with my old pal Nick Helm and he’s got some typically outstanding new stuff to say. See them all!