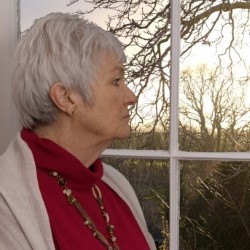 “I’ve also made a daytime television ad that seems to be on all the time and which my friends keep commenting on.”

WHAT: “In a house in the hills at the end of the day a grandmother remembers her first date, the man she married and the ups and downs of their life together. A one-woman play with an intense and moving portrait from Maggie Macleod. First produced in London in 2013 and described as an ‘utterly convincing portrait of love’ (BroadwayWorld.com) and ‘a masterclass in the art of the monologue’ (Beige Magazine). Playwright Martin Foreman is the winner of the 2018 Pitlochry Festival Theatre Short Play Award and 2012 London Solo Festival New Writing Prize.”

Yes! I’m very excited to be appearing at the Fringe for the first time. I came to acting late in life and the Fringe is something I have always wanted to do. It’s even more exciting – and nerve-wracking – to be in a solo performance.

I’ve appeared in Outlander Series 4 – and remembering the great time I had with the wonderful cast. I’ve also made a daytime television ad that seems to be on all the time and which my friends keep commenting on.

Sunset is a wonderful portrait of a woman in later life who is forced to look back at forty years of marriage and all the issues – love, infidelity, motherhood, career – which my generation had to face. Surprisingly, it’s written by a man, Martin Foreman, who is also directing the piece, and I’m impressed by his awareness and sensitivity. This is a revival. The play hasn’t been seen since it premiered in London with Carolyn Lyster (our generation remember her from Crossroads). We have no commitments for after the Fringe, but we are hoping to take it to small theatres around Scotland – and maybe further afield.

I have to recommend Arbery’s other show this year – an award-winning production of the powerful one-act drama Bull by Mike Bartlett. A strong piece with excellent acting. I’ve heard good things about EGTG who bring a production each year and would love to see Mark Ravenhill’s Pool (No Water). My writer / director Martin always recommends Glenn Chandler; I haven’t seen any of his work so I’m looking forward to his The Good Scout.