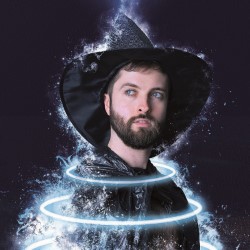 “My least favourite year was 2016 because I had 35 walkouts in one show and that wasn’t even one of the worst shows I had.”

WHAT: “Come! Escape into the Realms of Warquest, where you can level up, complete quests, defeat monsters and watch a cheeky little man do some stupid character comedy. That’s right my friends, it’s another bit of fun from David McIver, all about escapism, loneliness and role-playing games. ‘Had his audience in fits of laughter’ ***** (LondonTheatre.co.uk). ‘Uniquely inventive in its approach to comedy’ ****½ (ShortCom.com). **** (BroadwayBaby.com). **** (FringeGuru.com). **** (MumbleComedy.net). Appearances on BBC Radio 1, Radio 4 Extra, BBC Three and iPlayer. Directed by Jordan Brookes.”

This is my fifth consecutive year at the fringe and my second full-length solo show. My favourite year was 2017 because my show was in the evening, so I could stay out as late as I wanted and nobody could tell me off. My least favourite year was 2016 because I had 35 walkouts in one show and that wasn’t even one of the worst shows I had.

I got my ear pierced. New year, new me! I think I look very nice.

It’s a silly character comedy show about escapism, in which I recreate a World of Warcraft-style, online roleplaying game. I wrote it, it’s directed by Jordan Brookes and produced by Objectively Funny. I’ve previewed it at the Brighton and Prague Fringes, as well as in London. After Edinburgh, I’ve got a friend who runs a theatre in Georgia, USA, and I’m going to take it over there; I hope they like all the reference to Liverpool players from the mid-2000s. I’m telling people I’m going over to crack America, one regional 40-seater theatre at a time.

They should see Will Rowland’s Cocoon! Will is doing his debut hour of stand up and he’s so funny, sensitive and thoughtful. Jordan Brookes’ show I’ve Got Nothing and watch out for everyone being produced by Objectively Funny! Siblings, Harriet Braine, Tom Mayhew, Yasmine Day and Nathan Roberts.