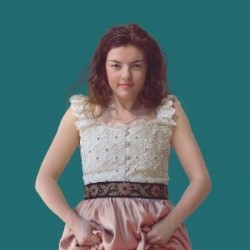 “It is a piece of theatre made by me and three of my best friends from school. I’m a theatre maker, Lydia is a seamstress, Nobahar is a singer and Olivia is a dancer.”

I have taken a new show up to the Edinburgh Festival Fringe under ThisEgg every year since 2012. A lot of this was during holidays from university. After graduating, it became less of a ‘fun thing to do’ (though still that too otherwise I don’t know how I’d get through the month…) and more of a working model for my company – opening a show at the Festival and booking a tour for it from there. It is a difficult routine to shake…

Being back at the Edinburgh Festival Fringe as part of the British Council Showcase is one of the biggest things to have happened to us since last year. When we took the show to the Edinburgh Festival Fringe in August 2018, it felt like a month of women being on stage, women putting their work on stage, women putting their lives on stage. Brilliant. And, being the ‘#MeToo Fringe’, we were definitely on trend. Trends in theatre (and life generally) are funny though… things get put on stage because of the time we are living in. Women’s stories had a profile, the platform we had been looking for, but, as we all know very well, time passes. Time passes and trends shift. What will it be this year? We hope we can keep the conversations going. Surely these stories, these voices, these shows aren’t just being watched because they are fashionable, but because they matter. I hope our time hasn’t passed.

It is a piece of theatre made by me and three of my best friends from school. I’m a theatre maker, Lydia is a seamstress, Nobahar is a singer and Olivia is a dancer. The show is based on a real life event. In 2012, Lydia was stripped at gunpoint. 5 years on, in 2016, Lydia gave herself one year to make her entire wardrobe from scratch. She blogged about the process (at mademywardrobe.com) making her clothes had allowed her to reconnect with her body. It was an act of redress – she could protect herself with a brand new healing set of armour. At the end of that year, she gave away all shop bought items. Lydia now only wears clothes she has made. On the last day, she wrote about why she had done it.

The response was mega, from friends and family but also other women, and the press and media. She was invited to write for newspapers, magazine, talk on podcasts, radio shows. Somewhere along the way she felt like she had lost control of her story. For Lydia, it is always about creativity, about turning something dark and traumatic into something beautiful. I had spent years watching her do this on her own, so when she asked me if I wanted to collaborate and make a show about it, it was an absolute yes. We wanted it to be from the perspective of joy, friendship and female performance. That’s when we asked our friends Nobahar, a singer, and Olivia, a dancer, to make it with us. They said yes too. On one level, I guess that’s what dressed. Is about really, the four of us. We have just finished touring the show across the UK. As far as we know now, this is the show’s last stop.

There is so so much great stuff on!! A few ideas… I’ve seen Rhum & Clay’s War of The Worlds and it’s super, I want to see Katie Greenall’s Fatty Fat Fat and won’t get the chance because of a time clash with SWIM (a show I am in with Sam Ward and Liz Richardson) so maybe come see that one too?