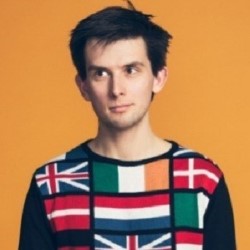 “The last few shows have gone alright, but this year may well push me into the next phase: taiko drumming.”

WHAT: “The Tales of Kieran Hodgson: Part Four. Nominated for Best Show, Edinburgh Comedy Awards 2018. Passion. Betrayal. Harold Wilson. In June 1975 the United Kingdom voted to remain in the European Community. Since then, things have changed somewhat, and character comedian Kieran Hodgson wants to find out why. On a deeply personal quest for understanding, Kieran discovers that the 70s were about more than just Tiswas, the colour brown and the words ‘let’s go on strike again’. It’s the politics one. **** (Guardian). **** (Times). **** (Telegraph). **** (Scotsman).”

WHERE: Pleasance Courtyard – Pleasance Beyond (Venue 33)

Sadly not. The fire is dim, the joints are stiff, and I’m back for Fringe number thirteen. Unlucky for some! Technically I only did one night in 2017, though – does that count? I started off doing a uni revue (’07-’08), then migrated through the rough-and-tumble of sketch (’09-’12) into solo character comedy (’12 – Present). The last few shows have gone alright, but this year may well push me into the next phase: taiko drumming.

Christmas was pretty epic this year. I had it at my in-laws’ for the first time and it involved a lot of high-spirited card games, a walk on the beach and a visit to the cracking Ocean Liners exhibition at the new V&A in Dundee. Highly recommended.

I’m having a go at a sort-of ‘retrospective’ this time round. I’ll turn up for the final fortnight of the Fringe and perform a set of four previous shows, one per night in rotation. They got good reviews at the time but I fear they may not have aged well. Still, if there’s anyone out there with happy memories of them, or no memories of them at all, now’s your chance! I’m a character comedian so all the shows are full of lots of different characters, held together by a kooky story. There’s one about a Parisian switchboard operator (called ‘French Exchange’), one about a plague of boils (called ‘Lance’), one about debit cards (called ‘Maestro’) and one about a childhood IQ test I once took (called ”75′). They’re all on at the Pleasance for a last hurrah and then I shall start the proper work of writing a new show for next year. Promise.

I reckon you should check out these fantastic new sketch guys called Moon, and this fantastic new character comedian called Alexander Fox. I’ve seen their previous shows and they were electric! My other recommendation would be for the legend Arabella Weir, who’s bringing a hilarious and very moving debut solo hour to the Fringe this year called, rather brilliantly: ‘Does My Mum Loom Big In This?’