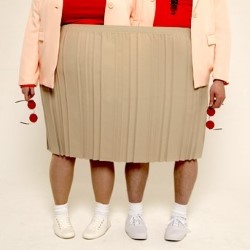 “He was called Norman and we think he only came in to get out of the rain.”

WHAT: “Yorkshire’s finest meat-themed double act is back, in an all-new sketch comedy nightmare. This time the perennial bad lads of Icklewick are at Ginster’s Paradise, a holiday camp unlike any other. Surreal shenanigans, unsettling illustrations and a staycation adventure you’ll never forget! ‘Very smart writing’ (Best Shows at the Edinburgh Festival 2018, Guardian). ‘A serious double act contender for a long time to come’ (Scotsman). ‘Barmy comedy fantasia’ **** (TheWeeReview.co.uk). ‘Old-fashioned silliness with modern comedy sensibilities’ ****½ (ShortCom.co.uk).”

This is our third Fringe on the trot! We made our debut in 2017 with ‘Cold Hard Cache’, a show about the internet and yeast. On the first day we played to a small audience. He was called Norman and we think he only came in to get out of the rain.

We went back the year after with ‘Regeneration Game’, a show about localism and community. Well, at least that’s what we told the MSM. It was really just about bumholes.

This year we’re powering up, ‘Ginster’s Paradise’. And we promise you this – it’s going to be the most needlessly sexual lunchtime show at the festival.

Won’t someone stop us, please?

We’ve had such a busy year! Following last year’s show we were selected to be part of the BBC’s prestigious comedy room initiative to develop new writers which was an amazing experience. Amy was also awarded the Caroline Aherne bursary to develop northern comedy voices.

Ginster’s Paradise is a surreal sketch comedy adventure. It was written by some kids who may have mistakenly been led to believe it’ll count towards their Duke of Edinburgh award. And it’s being directed by Colin Hoult, the genius behind Anna Man which we’re really excited about.

The show itself is another thrillingly bonkers adventure set in ‘Yorkshire’s most likley to be repressed holiday destination’, Ginster’s Paradise. The inept duo find themselves in hot water when then camp isn’t all it appears to be. We’re not going to say more than that!

We’re planning on following up Edinburgh with another wee tour which is already in the works!

That’s such a tough question as there are so many amazing looking shows this year!

Okay, well if you like it weird here’s our list of the festival’s most unnerving creeps. First off, we’ve got The Death Hilarious performing Razor. It’s a one-man sketch comedy nightmare which will terrify, delight and decay in equal measure. You should also check out known Sheffield’s absurdist King, Sean Morley. If his new show is anything like the last one, you’re in for a real treat. And surely your festival won’t be complete without a visit to see the deliriously unique Harriet Dyer performing The Dinosaur Show. Also make sure to check out character absurdist, Jayne Edwards, who is making her festival debut as Top Body Builder Brian. Genuinely gut-wrenchingly funny stuff which absolutely nails those gammon snowflake blokes.

We’d also recommend catching the new shows from Jen Brister, Jess Fostekew and Desiree Burch. All trailblazers, all hilarious and all class acts. We’re also looking forward to the new show from Alasdair Beckett-King. His debut was a triumph and this new show casts him as a visitor from an alternate universe so we’re so in. You should also try and get tickets for Sunil Patel’s new show, White Knight and Nick Elleray’s, Big Nick Energy. They’re both deadpan and hilarious!