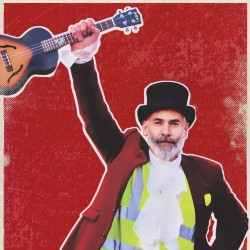 “I lived and died many times in Edinburgh so it is appropriate that I should now be at the Banshee Labyrinth, Edinburgh’s most haunted vanue.”

WHAT: “From ‘mercurially witty’ (Spectator) creator of YouTube smash 17 Million F*ck Offs – A Song About Brexit come comic songs, stories and stand-up for people who think the government should stay out of it. If you believe in things like free speech, free trade, bitcoin or Brexit, you’ll like this. If you think the government, BBC or EU has the answers, you won’t. Contains unacceptable views and swearing. No entry to statists, crony capitalists or the metropolitan liberal elite. As seen on BBC, ITV, Sky, Channel 4, Dave etc. ‘Outstanding’ (Times). ‘Excellent’ (Telegraph).”

I first came to the Festival in 1998, doing an act called Ludwig The Bavarian, a Bavarian slap-dancer looking for slappers.

A couple of years later real Germans such as Henning Wehn and the Christian Shulte-Loh started coming to the circuit, and I figured it was time to drop the act.

I lived and died many times in Edinburgh so it is appropriate that I should now be at the Banshee Labyrinth, Edinburgh’s most haunted venue.

I got a book deal with Penguin for my show about tax (which I actually did in Edinburgh 2016). The book is now written and will be published in October.

My song about Brexit – 17 Million Fuck-Offs – got to Number One in the Amazon charts and made the Top 20 on iTunes.

I then started doing them on stage and audiences (those sympathetic to that world view at least) seemed to really like them.

I’m really not sure how they’re going to go down in Edinburgh. I’ve found a drummer and a Keyboard player but to say they are going to be under-rehearsed is an understatement.

And if you’re feeling grown up, come and see my lecture about the economics of the festival which I’ll be doing in Adam SMith’s own front room.