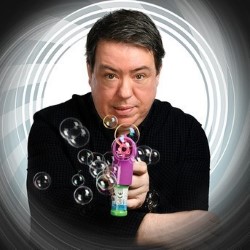 WHAT: “Matt Price was asked to work on a writing project with a former criminal. From day one, he was out of his depth… Matt (‘Fearlessly funny’ **** (Scotsman)) looks as though he may blend into the criminal underworld quite well, until he blows his cover by speaking. This story is as unique as it is ridiculous. Matt Price is widely regarded as one of the best storytelling comedians in the country. He is not a criminal and his hooter remains unbroken! **** (Chortle.co.uk).”

This will be my ninth solo show and my 13th year at the Festival. It’s great to perform every night for a month and to see so many of my friends from the comedy circuit. I love not having to travel too!

I’ve started a podcast where I interview former criminals. It’s called conversations with criminals. I’ve been in some funny and scary situations, including one guy who showed me his gun! Weirdly, I’ve learned a lot.

My show is about when I was asked to work on a writing project for a former gangland criminal. I realised very quickly that I was out of my depth. Produced by Bound and Gagged. I wrote it because I lived the experience. Right now, I’m not thinking beyond the Festival, but I’d love to tour it. My previews has been good so far.

Esther Manito is my tip for doing very well in her debut show this year. I would say to go and see Martha McBrier, Jack Gleadow as well and to watch Shaggers which is a late night show that’s run by Nik Coppin.