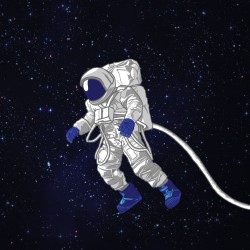 “I have been done some great pro gigs around the country and I have even written comedy for TV.”

WHAT: “Isa has been obsessed with outer space all her life, and she spent twenty years trying to become an astronaut. Did she ever get any closer? Award-winning comedian Isa Bonachera will take you on a tour of the cosmos and her broken dreams in this unique stand-up comedy experience. Isa is a BBC New Comedy Award 2018 finalist, Phoenix Artist Club Cabaret Award 2018 third-place winner, Leicester Square Sketch Off! 2018 runner-up, Max Turner Prize 2018 finalist, and Leicester Square New Comedian of the Year 2017 finalist.”

This is my third time taking a show to Edinburgh. The first time was in 2017 with a stand up show called “Wow!” that was transferred to Soho Theatre, and the second time was last year when I did a drag king show with my character Muchachico, which whom I reached the final of the Man Up! drag king competition and got third place at the Phoenix Artist Club Cabaret Award.

While I was in Edinburgh last year, I reached the final of the BBC New Comedy Award and since then my comedy career has skyrocketed, I have been done some great pro gigs around the country and I have even written comedy for TV.

The Great Emptiness is a tour of the weirdest parts of the cosmos, and a reflection on broken dreams and burn-out. An hour of original and offbeat comedy, filled with gags and plenty of out-of-this-world hilarious silliness.

This show is the a real-life story about my obsession to become an astronaut, the extreme lengths I went to achieve that dream, and the events that lead to the death of that dream. This includes stories involving Mars Rovers, meeting astronauts, and my experiences accidentally being involved in some of the major scientific discoveries of the century, such as the discovery of the Higgs Boson. The Great Emptiness gives an insider view of the best and worst parts of the world of science, and critiques the toxic culture of overwork that preys on people’s dreams.

This is a solo stand-up show and I am self-producing this year. So far I have performed the show at the VAULT festival, Leicester Comedy Festival, Bath Comedy Festival, Swindon Fringe, Prague Fringe and Hastings Fringe.

They should go see as many shows as they can, I have already planned the shows that I am going to see during my Edinburgh Fringe month and I already have more than 70 in my schedule. If I start recommending shows I will never finish but, just to name a few, I am excited to see Josie Long, Phil Wang, Kieran Hodgson, and Ahir Shah.