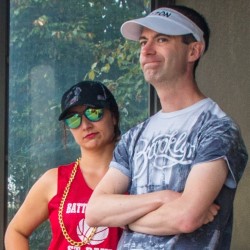 “The biggest thing for us personally is that we dumped our full-time jobs and moved out of London to near Manchester so we could build on the momentum Ed 2018 gave us.”

WHO: Andy Quirk, Performer and Writer

WHAT: “Andy Quirk, the UK’s premier rapper of first world problems and his surly lead backup dancer Anna J invite you to join their crew for their latest musical comedy show dealing with the inconsequential irks of modern living. Part concert, part group therapy session, with a genre-busting soundtrack paying homage to UK Garage, Scouse House, Funk, Eighties Synthpop, Nu Metal and more. There’s room in the crew for everyone!”

The biggest thing for us personally is that we dumped our full-time jobs and moved out of London to near Manchester so we could build on the momentum Ed 2018 gave us. So far we’ve settled in well with plenty of good gigs and a string of festival appearances across the north and midlands.

“99 (First World) Problems Feat. Andy Quirk and Anna J” is a thoroughly tongue-in-cheek comedy rap concert with elements of group therapy for modern living thrown in the mix. The show’s narrative draws on the chalk-and-cheese relationship of the unfailingly polite Andy Quirk and his surly thirty-something-going-on-fourteen backup dancer whilst also taking a subtle swipe at new media and the self-obsession of selfie culture. Lead by lead backup dancer, Anna J, the audience form our crew and are involved with every song in some way. Musically, we genre hop from Scouse House to Funk to Eighties Electropop and beyond. We welcome families with older children but its primarily a clean show for adults.

99FWP debuted at Leicester Festival earlier this year and has also visited the fringes of Coventry, Manchester, Buxton and Morecambe in the run-up to August.