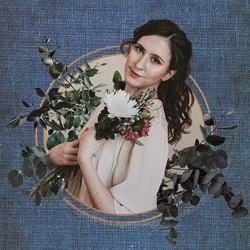 “It’s been a bit of a crazy year for my family.”

WHAT: “Charlie returns with more historical comedy, characters and stand-up. Napoleon and Amelia Earhart are back by popular demand but watch out for Jane Austen. Pasting together experiences old and new, expect trips down dodgy memory lanes, opinionated puppets, spontaneous discoveries and a showstopping finale! Like her previous two Edinburgh shows, this promises to be exceedingly charming, a little bit weird and very funny. ‘Talented in every style she pursues… a real renaissance woman’ **** (BroadwayBaby.com). ‘Deserves a wider audience’ **** (DarkChat.moonfruit.com). ‘Charming, hilarious and beautiful. An absolute must-see’ **** (Edinburgh Festivals Magazine).”

It’s not! As I’m originally from Edinburgh, I’ve been part of the Fringe or International Festival in one way or another since I was about 6.

This is my third year however as a solo performer, which is still really exciting. My first show was all characters but last year there was a bit more of me in it and this year it’s about 50/50. Prior to being a solo act, I usually would be here as part of a bigger improv comedy groups such as Glitch – The Improvised Puppet Show or Blind Mirth.

I guess it’s getting engaged! It’s been a bit of a crazy year for my family. My sister also had a baby so I’m an aunty now too! All of these big life events have had quite an impact on me and have inspired a lot of my show.

The show is written, produced, (funded) and performed by me. All of my shows have a historical theme and this time I’m looking at history and memory: how are people remembered and how do we want to be remembered? It sounds quite deep but it’s a very silly show! I play Napoleon as an agony aunt, Amelia Earhart as a motivational speaker and a very frustrated Jane Austen. There are puppets, stories and a big dance finale! This a fun, uplifting hour where you might also learn something. And it’s guaranteed to be the only show on the Fringe about spolia*!

Straight after my show, in the same venue, is Maddie Campion so stick around for her! James Bran, who will be helping me out on tech, is also back doing stand-up and Gabby Best is doing her first hour!