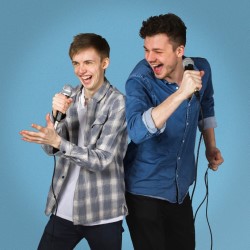 “Our first Edinburgh Fringe was last year when we performed on the 8th floor of a hotel and halfway through our run the elevator broke so we had to get the stairs.”

WHAT: “Beatboxing. Sketch Comedy. At the same time. They may not be the best beatboxers. They may not be the best sketch comedy duo. But they’re definitely the only two people stupid enough to combine the two. Join Daniel Stanger-Cornwell and James Hawley as they take you on a musical odyssey unlike any other. 2 Mouthed Men is a brand-new music-comedy act taking the UK by storm. Utilising beatboxing, rap, poetry, guitar, bass and looping, The 2 Mouthed Men Show promises to be a night to remember.”

WHERE: Just the Tonic at The Charteris Centre – Just the Sanctum (Venue 393)

No it is not! Our first Edinburgh Fringe was last year when we performed on the 8th floor of a hotel and halfway through our run the elevator broke so we had to get the stairs.

The biggest thing was probably performing at The Other Palace in London. It was our biggest yet and the energy was incredible. We also learnt so much from that about how to make our show the best it can be for the Fringe.

Pretty much what it says on the tin. 2 Mouthed Men is made up of James Hawley and Daniel Stanger-Cornwell, who combine beatboxing and sketch comedy for a musical comedy odyssey unlike any other.

The show is written and performed by James and Daniel while is produced by myself. We all met at University in Exeter and the idea was the brainchild of James during a lecture one day. Daniel took some swaying to the idea but eventually cake around to it. Our first show was a few months later and was a massive hit. That’s when we decided to try and take the show to the fringe.

We love comedians like Grant Buse who is another great musical comedian. His show at last year’s fringe ‘The Birds and the Beats’ was extraordinary and we can’t wait for his show this year.