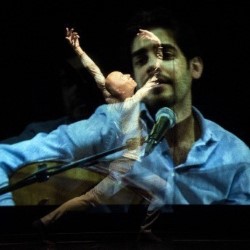 “We’ve been visiting South Korea and Hungary for the first time this year.”

WHAT: “A beautiful wordless dialogue between Iraqi traditional music and Finnish contemporary dance. The original aim of the work by oud lute virtuoso Ali Alawad and choreographer Alpo Aaltokoski was to contemplate the similarities and differences between two mutually alien cultures. But the rejection of Alawad’s asylum application dramatically affected the final form of the work. To avoid forced repatriation, Alawad fled Finland two weeks before the premiere. Nevertheless, Alawad still took part in the performance via video projection. The piece touchingly brings out the human experience and the consequences of increasingly restrictive asylum policies.”

Yes, for the company this is the first time. We are very much excited!

The story behind the show is quite peculiar; a planned duet turned into a solo work, sort of. It all started 2016 when Alpo and Ali met the first time. It was Alpo’s 30th anniversary as an artist where Ali was playing. He had arrived in Finland in 2015 as an asylum seeker. They started to collaborate and investigate the differences between two different cultures. Two weeks before the planned premiere, the rejection of Alawad’s asylum application dramatically affected the genesis of the work, and its final form. In order to avoid forced repatriation he fled Finland in March 2017 – two weeks before the premiere. Nevertheless, show was staged according to Alawad’s wishes, since he still took part in the performance via a video projection. Production is produced by Alpo Aaltokoski Company which was founded in 1995 as part of Nomadi collective. Ali and Alpo has been performed around Finland after its premiere, in Hungary and Russia (2019) and pitched in Dusseldorf Tanzmesse (2018).

We highly recommend the other projects part of the From Start to Finnish programme, and other Finnish productions as part of EdFringe. Un Poyo Rojo is must see and very curious to see Jo Strömgren’s Hospital.