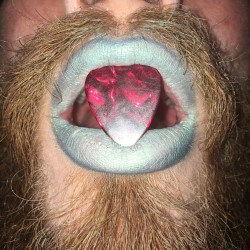 “Though I’ve done drag and performed live music many times before on separate occasions, I’ve never combined the two and doing so has proven an audience favourite…”

WHO: Joe Strickland, Writer and performer

WHAT: “Meet Polly, she doesn’t care what you think! All she wants is to be equal, for everyone to be equal. In a whirlwind evening of live music, spoken word and drag tomfoolery, Polly will put across her manifesto for ending all the world’s problems. Using drag and gig theatre, multi award-winning performer Joe Strickland will incite a rebellion against everything that holds us back in life, exploring the barriers that others put in front of us and the masks that we put in front of ourselves in the process.”

This is our 4th year up at the festival and we’re so excited to be able to bring this show this year. This is, however, my first year performing in this way at the festival. Though I’ve done drag and performed live music many times before on separate occasions, I’ve never combined the two and doing so has proven an audience favourite when we’ve been previewing the show so I’m very excited for festival goers up in Edinburgh to be able to see it.

Since the last Edinburgh Festival Fringe the director of this show and I have formed a new production company in Nottingham and we’ll be putting on 12 shows in 12 months from September 2019. Planning that has been a really exciting new experience and having this show to work on alongside that has been a really good strategy to give us something separate to work on so we don’t go crazy. Polly: A Drag Rebellion is going to be the last thing we do before starting the new company and we’re going into Edinburgh all guns blazing to make our mark before our new company begins.

I wrote the show in response to how I was thinking about the world. I wanted some clarity of what and how to think and worry about everything that’s been happening and realised that this is not only something that a lot of other people must be thinking but something that the wrong person could easily abuse and manipulate people with. What would happen if this progressive figurehead emerged and slowly turned out to not be who everyone thought they were became the story of Polly. The show has been previewed in Nottingham to a wonderful audience at the Nottingham New Theatre’s StuFF festival and will go on to be performed after the festival. We’re also going to release an album of Polly’s music for people to enjoy once the show has finished its EdFringe run.

Directly after our show, in the same performance space, is a truly wonderful improv show, Hard Truths. They start by having deeply personal interviews with the performers and use those real life stories to build a narratively strong long-form show which has comedy and emotion in equal measure. Hard Truths deserves a lot of love this year at the festival. Also, we’re taking up another show, Apollo: Take 111, which is a farce about the faking of the Moon landings that incorporates a lot of cinema and American 60s popular culture.