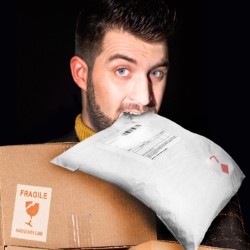 “I’d recommend seeing as many shows as possible. Take a punt on an unknown show, you might really enjoy it.”

WHAT: “Join Scottish Magician of the Year 2018 in this fast-moving show full of laughs and surprises. As you know, shopping online isn’t always as straightforward as it seems. With Slick tricks and a quick wit, Elliot will make your drunken late night eBaying look like the antiques roadshow rejects. His inimitable skill and seamless delivery promises to reveal the magic in the everyday. Post and packaging inc. Current International Brotherhood of Magicians British Ring Close-Up Magic Champion and nominated for the 2018 Fringe World Comedy Award in Australia. ‘Highly Recommended’ ***** (EdinburghSpotlight.com).”

WHERE: The Voodoo Rooms – The Ballroom (Venue 68)

This will be my 6th year performing at the Edinburgh Festival Fringe. I originally moved to Edinburgh to go to University and study study Sports Engineering.

I won the International Brotherhood of Magicians British Ring Close-Up Competition, down in Southport.

After the success of last years show, I took it out to Australia, and also back home to the Glasgow International Comedy Festival.

I primarily write the show, with the help from a few others that include creatives and and magicians. The show is produced by the brilliant ‘Blonde Ambition’ and the venue, the Voodoo Rooms.

I’m excited to hopefully take this show out on tour towards the end of this year/start of 2020.

I’d recommend seeing as many shows as possible. Take a punt on an unknown show, you might really enjoy it. Also grab the opportunity to see unusual shows that you wouldn’t normally get the chance to see.