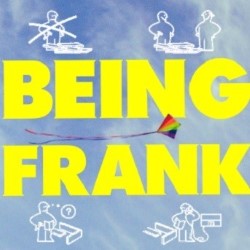 “I wrote Being Frank over the course of the last year…”

WHAT: “Frank’s son Alex is facing a mental health crisis, and Frank hasn’t a clue what to do about it or how to get Alex to talk about it. He’s got problems of his own, and what’s happening to Alex is opening up wounds he thought long forgotten. Weaving real-life stories into a fictional narrative, Being Frank uses humour, music, movement and a good deal of honesty to explore men’s relationships with each other, with mental health and with flat-pack furniture.”

This will be our third time at Edinburgh. We came up for the first time two years ago with the play “From Today Everything Changes” which was well received. Last year we returned with that play again plus my then latest play “Trans Pennine” which again, was very well received by audiences over the course fo the two weeks we were there.

I’ve had a busy year directing Things I Know To Be True at the Oast Theatre in Tonbridge. That was a huge undertaking, particularly working with the physical theatre aspect so much a feature of Frantic Assembly’s work, and composing the original music used in our production. It was totally new for our audience, and despite anxieties about how it would be received it could not have been received better.

I wrote Being Frank over the course of the last year, and it was developed in workshop with my colleagues at The Orange Works. We’ve been together for about three years now, born out of a love of taking original work to Edinburgh, and tackling issues important to myself – often LGBT issues, but this time my battles with Mental Health over the last few years. It will preview at Tonbridge Old Fire Station at the end of July, but Edinburgh will be its official premiere, and afterwards, we will be heading to the Faversham Fringe…. and wherever else we can!

I recommend “TEACH” by Bread and Butter Productions – he is one exceptional writer and performer, and I’m really looking forward to seeing this production after the sublime “Canoe” he performed last year.