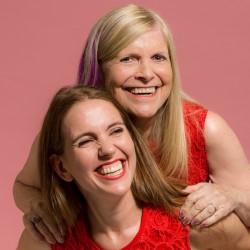 “Last year I couldn’t be in Edinburgh for the whole festival and I missed it so much – I had to come back this year.”

WHAT: “In 1961, Hannah’s mum, Angela, was in the Australian premiere production of The Sound of Music. The expectations of her generation, including motherhood, stopped her following that career. Now Angela’s retired, Hannah’s decided they’re doing a show together. By looking into Angela’s past, Hannah is weighing up her own life, choices and what the future holds for them both. Hopeful, optimistic and full of love, After You will leave you believing forgotten and hidden dreams can come true. After You premiered at the 2019 Adelaide Fringe. ‘Rare and profoundly powerful experience ***** (TheBarefootReview.com.au). ***** (Scenestr.com.au). ***** (Advertiser, Adelaide).”

Once I started performing and getting involved with the Adelaide Fringe in 2000, the Edinburgh Fringe sounded like the best place on earth. I finally got there in 2009 as a punter (I couldn’t believe how amazing Edinburgh Castle was looming over the streets below like that). In 2013 I worked with Hannah Gadsby as her support/flyerer/assistant/mate and finally, in 2015, I won the Underbelly Edinburgh Award for the dark and disturbing one-woman show ‘CUT’ that I performed in Adelaide and Underbelly brought over and produced two years in a row. I performed CUT nearly 100 times in Edinburgh across those two years.

Last year I couldn’t be in Edinburgh for the whole festival and I missed it so much – I had to come back this year. Also, once I visited Edinburgh in December and it was so strange to be there with quieter streets, much less sunlight and no colourful posters on every spare inch of wall surface!

Finally writing my first ever full show – and then performing it – and getting amazing, beautiful responses to it. I’ve been working as an actor for nearly 20 years and have wanted to write for almost as long but been too scared. I’ve had a really busy year with lots of travel and incredible experiences, but for me that is truly the biggest thing.

The moment I had the idea to do a show with my mum last August, I knew that if I didn’t do it, I would have regretted it forever. So we just started talking about her life, I asked lots of questions (with secret dramaturgical agendas and secret recording devices) and began stitching together a script and journey for the work. Throughout the process, I consulted with lots of theatre friends on all elements of the production but the content, style, heart and power of the show really did all come from me and my mum. I also taught mum more about acting throughout the months we were developing the work and she is so good! She fools me all the time – natural, consistent and an amazing performer. She’ll make you cry. And laugh. Don’t worry about that.

We premiered at the Adelaide Fringe this year to the most wonderful response from our audiences. And this led us to a short season at Melbourne’s gorgeous Butterfly Club – which was also brilliant. We can’t wait to bring it to Edinburgh!

There are no official plans for future dates but I have some witchcraft to do under the next New Moon and we’ll see if we can manifest some more world touring. I’d love to take the show to Canada because my mum lived there from when she was a few months old until the age of 6 and has never been back… yet. (let the witchcraft commence!)

We are on at 1.10pm – so I suggest you have a nice coffee (from Brew Lab or Kilimanjaro – I’m devastated to hear that Filament has closed – their ginger/lemon shots were a lifesaver) and start the day with us before heading off to a day packed full of shows. My list is huge already and I love that once the festival starts there’ll be shows I’ve never heard of that I’ll be telling everyone about – but you’ll have to hold out for those ones.

I can’t wait to see the new shows from Lou Sanders, Richard Gadd, Carl Donnelly (my husband), Scottee and Rosie Jones. You obviously have to go and see “Bryony Kimmings: I’m a Phoenix, Bitch” and Abandoman, Massaoke and Marcel Lucont will never disappoint. I’m super excited about Diane Chorley’s late night show, and feel like I’ll spend many an evening there. Comedian Tim Vine is doing a one-off Elvis show which I am not going to miss. Tara Rankine got an Adelaide Fringe award for her cabaret show “Love is a Work in Progress” and Brittany Plummer is doing her first ever solo show “Chameleon” – a clowning work – that I missed in Adelaide, but won’t miss here.

Also, need to see The Long Pigs and Shit – both involving amazing Australian theatre people. I’ve seen comedians Rhys Nicholson, Daniel Connell, Liza Treyger and Fern Brady – so good, so funny – and you need to if you haven’t yet. I could keep going – check my twitter – think I need to get busy recommending on there!!! Aaaaaarrrghgghhhhhh so much to see!!!!!!!!!