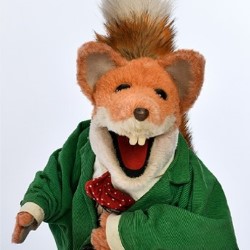 “…appearing at Glastonbury and meeting Kylie Minogue behind the pyramid stage …I’ve lent her some of my costumes, we are both the same size.”

WHAT: “Showbusiness legend, national treasure, fox. Children of the 2000s, 1970s (and everything in between) this one’s for you. As Basil makes his much-anticipated Fringe debut in a show for the adults! Fresh from appearances on The Last Leg (Channel 4) and Celebrity Juice (ITV2), join Basil as he gives his comedic take on everything from Love Island to Westminster in his trademark anarchic style, with different guests nightly. ‘Hilarious’ (DigitalSpy.com).”

This is my very first time to the Edinburgh Fringe as a performer… I didn’t think they would want such an English fox up there, but how wrong was I and now I can’t wait to be part of the biggest festival in the world and in the wonderful city of Edinburgh, do they have the real Edinburgh Woollen Mill up there? Is it different to the one in England…

The biggest thing to happen to me since the Festival last year was appearing on ‘The Chase’ …and winning! Also, I do Panto every year at the Theatre-Royal Windsor and met Prince Edward, and I won £10 on the National Lottery ……and appearing at Glastonbury and meeting Kylie Minogue behind the pyramid stage …I’ve lent her some of my costumes, we are both the same size.

We have two shows at the festival, ‘My Basil Brush Family Show’ in the afternoons, obviously for the families and kids …high energy, lots of audience participation, lots of getting grown-ups wet, and maybe cream pies! Then in the evening at 6:45 we have a slightly more grown-up show for the bigger kids up there… for those that grew up with me on CBBC and even those who were around in the 70s, it’s not a blue show but something where we take a look at the world from a talking fox perspective, lots of fun, but more Graham Norton meets ‘Crackerjack’!

I’ve been working with my current mister, Mister Martin for three years and we met in Panto and he wanted to be my sidekick, so he can stand at my side and kick him!

It’s going to premier in Edinburgh but it carries on at the Southbank and a select theatre tour as well! It’s is. Sing produced by SO Comedy, the comedy arm of SO TV, very exciting, Malcolm McKee has written it and he wrote the Shakespeare revue with Director Chris Luscombe for the RSC many years ago …there is additional material from myself and Mr Martin, and comedian Robin Morgan.

Once folks have seen my show they should take a look at ‘Dead Ringers’ because that is one of my favourites from the radio, and they should be daring and go see something they have never heard of take a punt ….then, of course, come back and see my show AGAIN …Boom Boom …