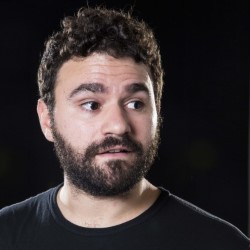 “The show went from being a distant idea to a thing I was performing and working on all year.”

WHAT: “Gabe Mollica started doing stand-up in Edinburgh after he got dumped for his best friend. Five years later, this New York comedian returns with a debut show about embarrassment, what it means ‘to comedy’ and rice cakes. Gabe’s stories have appeared on the Moth Radio Hour Podcast (NPR), he’s written jokes for the New York Video Game Awards and Hard Drive (TheHardTimes.net). He runs a popular show in New York City called The Funniest People I Met This Month. He does not have a podcast.”

This is my first fringe show, but I lived in Edinburgh in 2014 after graduating uni in the states. I had a rough year, you could say. My best friend and my ex-girlfriend got together and my life sort of spiraled… so just like everybody else I became a comedian.

Now, five years later, I’m very excited to return to Edinburgh and reclaim the city where I felt at my worst!

It’s been basically my only goal in comedy to create a show for Edinburgh and let’s just say I’m very excited to share.

The show went from being a distant idea to a thing I was performing and working on all year.

Since 2014, I knew I wanted to have a show that was essentially a long story but to go about actually putting together has been challenging and rewarding. (I had my first panic attack, did my first preview to a sold-out room of 70, and stayed up all night writing down very silly ideas that went nowhere.)

Like all the stand-ups at the Fringe, I wrote the show myself, with of course help along the way from my friends and fellow comics. I’d love to keep going with this story, perform it a bunch when I return to America, and one day maybe record it as a special or an album or something like that.

There are so many talented American comedians coming over. I’m most familiar with them, so I’ll say Kevin James Doyle has been a hilarious and helpful person while working on my Edinburgh Show. Check out his show “Loud, Blonde, Bald Kid.” Kevin has a way about talking about puberty and childhood that will make you laugh and blush and feel grateful to be an adult.

Emmy Blotnik is one of my favorite jokewriters in new york. She’s smart and silly. Cat Cohen makes me laugh in a way I didn’t think was possible. She feels like the future of comedy in a lot of ways. Dan Soder is an incredible comic, perhaps one of the best in America. He’s done my show in New York and I’ve continually been blown away by his material. Caitlin Cooke is an extremely talented comedian, musician and podcaster. I can’t recommend her show enough: It’s funny and sweet. (She’s also like, the nicest person. Sean Patton is one of the great American comics, his material is unique and interesting. I can’t wait to see his show a few times.

There’s also some great folks in the UK I’m excited to see like Christopher KC and Stephen Carlin. I met both of them while doing comedy in the UK in 2014 and they were both super nice, smart, and funny. It will be so exciting to see their shows and how much they’ve changed in 5 years

Anyone trying to get the most out of their Edinburgh experience should start with those comedians!!