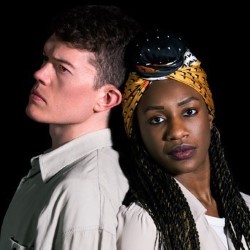 “We are very excited that Not black and white will premiere at Edinburgh Festival Fringe 2019 and will be followed by a UK tour in 2020.”

WHAT: “United by love, broken by reality. Remelle faces a constant battle to feel comfortable in her own skin. Her family want her to be proud of her heritage but she hasn’t become a successful business woman by flaunting her Jamaican roots. Now life’s pressures are starting to get to her, but are they all real? A new piece from the award-winning creators of the critically acclaimed Freeman. Praise for Strictly Arts: ‘a revelation, a piece of stunning physical theatre’ (Guardian). ‘Outstanding artistic courage’ (BroadwayBaby.com). ‘Breath-taking ensemble work that is visually captivating’ (Everything-Theatre.co.uk).”

WHERE: Pleasance Courtyard – Pleasance Above (Venue 33)

Our first time at Edinburgh Fringe festival was last year performing Freeman. It was quite an overwhelming experience, not only because Freeman did so well and we received tremendous support, but also because the festival is so BIG. It’s exhausting but also rewarding which is why we’re coming back for more.

We went International for the first time! Off the back of the Fringe run, we were given the opportunity to perform Freeman in Chicago at the Physical Theater Festival in June, and in August the Freeman cast will be heading to Peru to perform the show and deliver workshops in Lima.

Our new show, Not Black and White, explores the pressures placed on a young successful black woman; in the workplace, at home, from her family, and the struggles she has with her own identity, through the prism of an interracial relationship. Her husband also struggles with his own feelings of inadequacy and his finite capacity to empathise with the issues he’s never had to experience.

It is written and directed by Strictly Arts’ Artistic Director Corey Campbell, recently made a Creative Lead for the Coventry City of Culture 2021 project, and is produced by Strictly Arts Theatre Company in association with The Pleasance. We are very excited that Not black and white will premiere at Edinburgh Festival Fringe 2019 and will be followed by a UK tour in 2020.

The Fishermen was our favourite show last year and it’s back for 6 shows only so do go if you can. We’d also recommend The Charlie Hartill Special Theatre Reserve Fund recipients: Poor Michelle’s Bible John and Wonderbox’s A Womb of One’s Own.