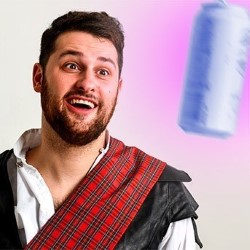 “Our Artistic Director got our resident drunken Technician pregnant which has meant neither of them are at the Fringe this year and we have had to hire an even bigger drinker to don our tech box for Edinburgh 2019.”

WHAT: “They have toured the world, won multiple awards, broken onto London’s West End, survived eight consecutive Festival Fringes and once received a zero-star review in The Times! They are Shit-Faced Shakespeare and they are back in Edinburgh with an all-new show for 2019. Featuring a cast of classically trained actors and a single drunken performer thrown into the mix every night. What could possibly go right? And to make sure that luck will be on their side, this year they are bringing Macbeth! Is this a lager I see before me? Yes, yes it is.”

No we have been mixing our cocktail of The Bard, Booze and Bonny Edinburgh together since the opening of the Olympics back in 2012. This year is our 8th Edinburgh Fringe Festival and we are delighted to be back in the beautiful (and really rather large) McEwan Hall.

Oh, want the gossip do you? Well, our Artistic Director got our resident drunken Technician pregnant which has meant neither of them are at the Fringe this year and we have had to hire an even bigger drinker to don our tech box for Edinburgh 2019 – is that the kind of personal news you were after?

Shit-faced Shakespeare was the brainchild between Rev. Lewis Ironside and Cpt. Chris Snelson; one drunken night they came up with the concept, then one – I forget who – accidentally blurted to a national newspaper that they would be putting it on at SGP that year. When the article got published the show had to go on and so the hilarious combination of an entirely serious adaptation of Macbeth with an entirely shit-faced cast member was born. This year marks our 10 year anniversary of performing SFS so the formula is still ‘going down nicely’. We basically take 6 classically trained actors and get one of them, classically, Shakespeareanly, shit-faced. What could possibly go right?

We are a huge fan of the guys at Massaoke – you can’t come to the fringe and not go and have a mass singalong with all the other festival goers… Also it’s the best gig in town to get your sequins on for.
If you really enjoyed our show though do go and check out our younger better-looking sister performing at the Cowbarn, Shit-faced Showtime: Alice through the cocktail glass – we may be biased but it really is bloody brilliant!