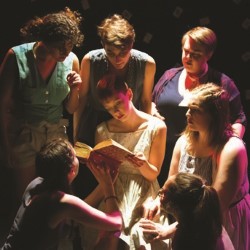 “Our biggest discovery came with the realization that not one of us is just an Alice. We are all so many things and are capable of so much.”

WHAT: “A well-loved family favourite. Have tea with the Mad Hatter, chase the White Rabbit and hear about the Jabberwocky in this modern adaptation complete with original music, dance and puppetry! Repurposing passages from Lewis Carroll’s classic stories, Permafrost Theatre Collective presents a bold reimagining of Alice, questioning preconceived notions of identity, womanhood and self-acceptance in a Mad Hatter world that constantly redraws the lines and rewrites the rules.”

A few of us have gone as audience members but this is our first time as participants! For a number of the cast, performing at the Fringe has been a career goal of theirs. For me, I have always wanted to be able to show my work internationally. I am so excited that we all get to cross off huge items from our bucket lists!

The tremendous growth of this show! We started out in April of 2018 with four performers and one musician. We were able to add more cast members and creative content through a week-long residency on Governor’s Island courtesy of the Rising Sun Performance Company. This past March, we embarked on the third iteration of the show at The Tank NYC. For that production, Are You Alice was advertised in the New York Times, which is a HUGE achievement for an independent theater company in the city!

It all started with a desire to adapt Alice in Wonderland in a new way. In November of 2017, not having any creative projects lined up at the time, I emailed groups of multi-talented artists that I knew to see if they wanted to get together for a few rehearsals and just play. We began by exploring themes of childhood loneliness, adult pressures and expectations, and imaginary friends. The show really began to take shape when we started using the texts of Lewis Carrol, which are thankfully in the public domain. Our biggest discovery came with the realization that not one of us is just an Alice. We are all so many things and are capable of so much. Since our first workshop performance in April 2018, we have had countless discoveries with more multi-talented artists and were fortunate enough to have two more exploratory productions. Ed Fringe will see the fourth iteration of the show with the four original performers, three amazing additional performers, and one immensely talented musician who composed the music for the show.

The main producing company, Permafrost Theatre Collective, grew out of this theatrical journey and aims to produce new work and to retell classic stories in unique and challenging ways. We are also being produced by another movement-based NYC company, The Chameleon Fools Theatre Troupe.

We have no direct plans after Edinburgh but are open to the idea of more adventures!

I suggest seeing Hitler’s Tasters at Greenside. I saw the original production here in NYC and was completely blown away. I have to shout out Drowning playing at Pleasance Courtyard. Their social media presence has been helping to boost female-led productions at Fringe.

And since our show is enjoyable for all ages, go see Alice and the Little Prince, also at Pleasance Courtyard!