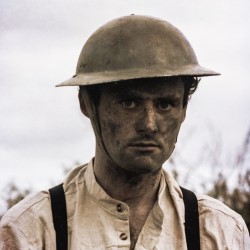 “Neighbours! I managed to snag a small role on the long-running soap that aired in February this year, which seemed to bring a lot of old fans of the show out of the woodwork!”

WHAT: “France. 1918. The Allies are about to lose the war. A deadly night assault led by the Australian troops of the 15th Brigade could swing the balance. Follow the journey of George Stevenson through the nightmarish horrors of the Western Front trenches. A story of mateship, courage and the ultimate cost of war. Based on the real events at the battle of Villers-Bretonneux.”

Yes. First time bringing a show on tour, so extremely excited to navigate all of the challenges and unexpected joys of a completely new environment.

Neighbours! I managed to snag a small role on the long-running soap that aired in February this year, which seemed to bring a lot of old fans of the show out of the woodwork! Felix Benson will hopefully return to Erinsborough again, and the desperate public will learn what happened to the tree or shrub he was so intent to buy.

Aside from that, I was lucky enough to be in the feature film Stringybark; a historically accurate yet controversial take on the Ned Kelly gang; from the perspective of the Police in 1878. Stringybark is set to hit screens in late 2019.

I also played Michael in Double Black, a dark-comedy mixing in Mountain Bikes, Mental Health and the depths of masculinity. A hugely challenging role, this film asks a lot of questions, and will definitely ruffle some feathers in our current political climate.

Echoes of Villers-Bretonneux debuted at the Melbourne Fringe Festival in September 2019, after I spent most of the year researching and writing the one-man show. The initial draft was approx 10,000 words, which we sliced down to avoid the show being too bogged down in detail and exposition.

I had relatives involved in WW1, and feel it is such a huge part of modern history that is vastly under-represented.

In Australia, much of the public knowledge is limited to Gallipoli, whereas some truly incredible stories emanated from the Western Front that sadly are rarely heard.

Most of Echoes of Villers-Bretonneux is based on historical fact, largely drawn from the incredible accounts of CE Bean, the official war-correspondent of the Australian Imperial Force during WW1.
I wanted to create an account of the conflict that does justice to those who served, and show what life was really like in the trenches, and what it took to survive and come home with your soul intact.

There’s a few shows at other Greenside Venues I’m really excited to see.

“Wrath of Achilles” – by Bedivere Arts Company – is an adaption of Homer’s The Iliad, and looks to retell the drama of the Trojan War.

Wrath of Achilles is playing at the Mint Studio in Infirmary St, for the whole season at 5.20pm.
Another I’m looking forward to seeing is “Enigma”, an original musical about female American codebreakers in the Second World War.

Enigma is playing at Nicholson Square during the 1st week of Fringe, in the Fern studio at 5.30 pm.
“Sales Pitch” is another can’t-miss show, a darkly comic piece of theatre presented as an investment seminar.

Sales Pitch is playing at the Forest Theatre in Infirmary Square, with shows at 3pm, for the last two weeks of the festival.