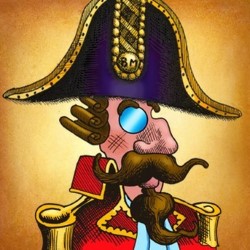 “The Baron is a huge fan of Edinburgh and has been to this beautiful city on many occasions.”

WHAT: “Amazing tales, elegantly told. Top award-winning comedians and improvisers tell extravagant stories, all based on The Adventures of Baron Munchausen. There will be swords, duels, elephants, castles built of cheese and all of it completely and irrefutably true! Discover how the Baron invented morris dancing, how his actions saved the Isle of Skye from sinking beneath the waves, why every fourth child in Bruges is named after him and other fantastically delightful stories. This show will delight adults and children with its wonderful joie de vivre and other pretentious words!”

Oh no, The Baron is a huge fan of Edinburgh and has been to this beautiful city on many occasions. Last year he got trapped by an ogre inside Arthur’s Seat and only escaped because he’d remembered to take a whisk with him. It was quite the adventure and I’m sure he’ll tell you all about it this August.

The Baron has been telling his stories in this show in Edinburgh for the last two years, but his adventurer friends have done over 50 Edinburgh runs between them.

Well, we were nominated for “Best Kid’s Show 2018” at the Leicester Comedy Festival which was pretty special. We had a sell-out run at the Attenborough Arts Centre which was amazing. Then we had another sell-out run at the Brighton Fringe. We’ve been featured on the BBC and done several great radio shows. But, I think the best thing we’ve done since last year is to continue having such fun with so many families at our shows. We genuinely love doing this show because it’s always so joyful. We never know what ideas or suggestions that our audiences are going to throw at us so it’s always spontaneous.

The Extraordinary Time-Travelling Adventures of Baron Munchausen is a family friendly, improvised storytelling show. It features a cast including Nigel Lovell, Will Seaward, Gordon Rideout, Alice Moore, Ellie Griffiths, Donna Scott and many other award-winning comedians and improvisers. We came together as we’ve all been on hundreds of adventures with The Baron and we wanted to have the opportunity to share these with families because the stories really encourage creativity and confidence in children. It’s based on an original idea by James Wallace, who in turn was influenced by the great jewel thief, Rudolph Eric Raspe. We are really looking forward to the Edinburgh Fringe and afterwards we will be returning to the Attenborough Arts Centre, Leicester before doing the Esher Festival and then we *hope* to be taking the show on tour all over the UK.

I hate this question simply because there is so much great stuff on during the Fringe. I Believe in Unicorns by Michael Morpurgo, First King of England In a Dress, Bumper Blyton, all are great family shows. My advice is to take a chance on something that you’ve never heard of before, sure the Gruffalo might be something that everyone knows but if you go and see Science Magic, the kid’s will probably enjoy it more (because they don’t know what’ll happen) and they’ll learn more from it too.