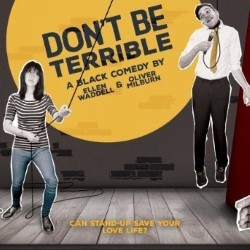 “Our main character, self-confessed nice guy Steve, thinks comedy can save his relationship.”

WHAT: “Can stand-up save your love life? Self-confessed nice guy Steve thinks so. That’s why he’s asked Alice, an up-and-coming stand-up, how to make people laugh. It’s his last-ditch attempt to distract his girlfriend from the funny guy at work. Unfortunately, misanthrope Alice believes in comedy much more than she believes in love, and may not be quite the guru he was expecting. A comedy about comedy, that asks whether nice is ever funny and whether sexy is ever nice.”

I bought two solo shows here previously, and this is the second year of bringing up this show. I have also been up as a punter dozens of times.

After our Free Fringe run in ‘18, we put on several showcases of the play in London, and The Pleasance came along and offered us a spot for this year. Which was mind blowing.

It’s a pitch black comedy play that asks ‘can stand up save your love life?’ and it straddles the thin and meta line between stand up and play. Our main character, self-confessed nice guy Steve, thinks comedy can save his relationship. That’s why he’s asked Alice, an up-and-coming stand-up, how to make people laugh. It’s his last-ditch attempt to distract his girlfriend from the funny guy at work. Unfortunately, Alice believes in comedy much more than she believes in love, and is not the guru he was expecting. It was written by myself, Ellen Waddell, and Oliver Milburn and is self-produced. I came up with the premise for the show after I got dumped, and then decided to do a stand-up gig that evening.

I overshared with the audience due to break up sadness, and bombed. It was a horrible set, and probably not funny. BUT it did give me the idea for a play about two characters dealing with relationships through stand up. I then pitched the idea to my old university chum Oliver, who is a freelance director and writer. Luckily he was keen and we worked on the show together and took it to the Free Fringe in 2018. It went very well, and we are very excited to bring it back this year, and hope that afterwards, it gets a London theatre run, and/or regional tour.

Briony Redman is Indecisive (or Isn’t, You Decide!) – she’s an amazing comedian and improviser, and her shows are normally deeply charming and full of funny sketches and bits of character comedy. Very much a feel-good show, which is essential when you are at the fringe.