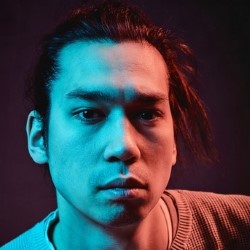 “I once went to the Hive nightclub when I was visiting a friend, but I left after half and hour and broke into someone’s back garden to stroke a big cat that I saw lying in an empty water basin.”

WHAT: “From Comedy Central at the Comedy Store. Huge, one the most exciting and unique new acts in the UK, presents his highly anticipated debut show. Expect dark humour, surreal songs, his customised wearable keyboard, and of course, car parks. He’ll be attempting to wear a full-size keyboard around his neck for most of the show. It’ll be funny but he’ll struggle to finish the hour. His comedy performances have featured on BBC Radio 1, BBC Radio 4, BBC3 and ITV1. ‘Priceless’ (Chortle.co.uk). ‘Dark’ (Independent). ‘Scene-stealing’ (Telegraph). ‘Perfect’ (The Stand Comedy Club). ‘Brilliant’ (The Student). ‘Appalling’ (CelebrityRadio.biz).”

Edinburgh Fringe has been my summer for a number years now; as a curious comedy fan, then as a aspiring open- mic comedian/flyerer, as a musician and finally as a solo-stand up with my own show. Outside of the Fringe, I once went to the Hive nightclub when I was visiting a friend, but I left after half and hour and broke into someone’s back garden to stroke a big cat that I saw lying in an empty water basin.

I made my first stand-up television appearance on Comedy Central Live at the Comedy Store, which is an achievement I’m really proud of. To have my act immortalised on a such a consistently well-billed show, that I used to watch as a teenager, was a very strange and rewarding experience. That or I learned the theme tune to The Apprentice on my keyboard, which has been on my to-do list for a while now. It sounds pretty close to original and I’m really pleased with the result.

My show, which I wrote and perform in, is an hour of me wearing a full-size keyboard whilst telling dark jokes. It sounds a bit bonkers and hurts my back after a bit, but it is funny, so I’ve really dug in. The focus of the show was pushing the limits of the keyboard to make a fun, creative, layered, original hour of musical comedy, which I’ve achieved and I’m looking forward to performing for the month. I’m already booking some show post-Fringe in London, but hopefully it will get me to a point in which I’m so famous I forget all my old friends, live a life of luxury, have my life spiral into a pit of jealousy and loud sunglasses, until the last minute, where I move back to my hometown and realise what’s really important; family. Like branches on a tree, we all grow in different directions, yet our roots remain as one.