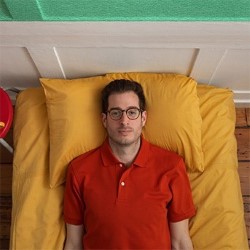 “My show this year is a bit of a departure from my usual stuff as it will be a personal storytelling type show.”

WHAT: “Dave grew up with two beds in his bedroom and he’s trying to find out why. Join Dave as he takes you on his journey to becoming a celebrity lookalike and the resulting chance encounter which forces him to confront his past. Sometimes the only way to be yourself is to become someone else. Guest Bed is an absurd tale of shape-shifting identities and buried memories. ‘Keen eye for the absurd’ (TheWeeReview.com). ‘Fantastically original gags’ (Bruce Dessau). Time Out’s One to Watch.”

WHERE: Just the Tonic at The Mash House – Just the Attic (Venue 288)

This will be my seventh year doing the Edinburgh Fringe. The show is called ‘Guest Bed’ and it is the follow up to my debut solo show ‘Melt’ which I performed at last years festival. Prior to that I did a lot of split bill shows and appeared on some showcases like ‘AAA’ and ‘The Lunchtime Special’.

The biggest thing to happen to me since last years Fringe is that I have quit my day job and become a full time comedian. Partly because I am totally smashing the comedy circuit and partly because of some life events which have left me temporarily unable to work. I won’t give too much away here because this is kind of the subject of the show.

My show this year is a bit of a departure from my usual stuff as it will be a personal storytelling type show. Previously my style of comedy has been somewhat on the surreal side and I didn’t really talk about stuff from my actual life so this year is a little different in that respect. It’s still going to be a bit bizarre and otherworldly but it will touch upon some fairly dark real-life events.

After they’ve seen my show they are going to need to go home and take a long nap. When they’ve awoken from their slumber they should go and watch ‘Nick Elleray: Big Nick Energy’ at The Counting House. I did a preview with him the other day and his show is just so tightly written and full of great bits. Not a word wasted. I would also recommend anything at ‘The Heroes’ venues. They tend to programme stuff that is a bit more off beat and always seem to have a great selection of shows.