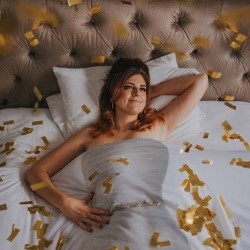 “I’m developing a sitcom script which is a life long dream of mine.”

This will be my first hour long show at the Fringe but my third year taking part. The first time was part of CKP Lunchtime Special – a compilation show of five up and comers including myself. Then last year I split the bill with my friend Steff Todd, so we did half an hour each.

I got to host the stand up comedy show the Comedy Underground on BBC Scotland and filmed a six part comedy BBC series called State of It which will be up on the iPlayer later this year. I’m developing a sitcom script which is a life long dream of mine and I’m supporting Arlon O’Hanlon and Fern Brady after the fringe on the Scottish dates of their UK tours! So it’s all really exciting!

Right well originally I wanted to call the show Lazy Susan but there’s a well known and very good sketch group who have this name already and they go to the Fringe every year, so I had to change it to save confusion. I settled on Duvet Day for the title and I just talk about how everything is getting in the way of me having a lie down to be honest. I love a good lie down. Nothing better. We should all lie down more.

My pal Steff Todd who I split the show with last year! She’s on at 2pm at Just the Tonic with her show Reality Check. She does great impressions of all the reality TV stars and she’s brilliant!