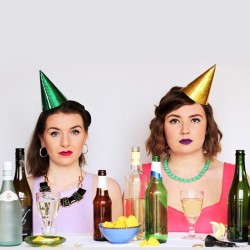 “We also love coming up to Edinburgh as punters because we blooming love theatre!”

WHAT: “Two women sit at a wedding. The Prosecco is free-flowing, emotions are running high and everything is dangerously overspilling in this sharply observed comedy about love, hate and all that lies in between. Throughout the night the women explore friendship, family relations, maternal ties, sibling rivalries and ex-boyfriends. Opening up old wounds and creating new scars in this ode to a quarter-life crisis! Both hilarious and harrowing, featuring original music, funky dance moves and just the right amount of cheesy pop Said and Done is a snapshot into the lives of two women who are too close.”

No, we’ve all been up to Edinburgh Fringe Festival before but with other companies. I came up with This Is Soap by Closer Each Day in 2017. Alice was here in 2016 with Spill: A Verbatim Show About Sex with Propolis Theatre. And our producer, Emma, came up with The Hours Before We Wake by Tremolo Theatre. This year we are very excited to be bringing up our very first show with our very own company, Sugarscratch Theatre. We also love coming up to Edinburgh as punters because we blooming love theatre!

We both went to a lot of weddings and drank a lot of prosecco, believe it or not. All for research, obviously!

Said And Done is set at a wedding party. Two twenty-something women are watching and commenting on all the rituals and conventions of a wedding. They people the stage using role play and game playing, so that we gradually learn all about the other guests, their dysfunctional families and their friends. They comment on everyone and everything with refreshing honesty and cutting humour, all the while dancing to cheesy pop and drinking copious amounts of prosecco. There is confetti too.

Alice and I went to drama school in London and when we got back to the thriving theatre scene in Bristol we both decided we’d like to set up our own company. Alice had started writing some dialogue (she had a vision of a woman dancing alone to Cher) then she showed it to me and we gathered together some other theatre makers together and devised the show over a period of time. It was a very collaborative process, that’s why no one gets the writing credit.

The producer at the moment is Emma (Tremolo Theatre) but before then we were supported by a Tobacco Factory producer called Vic Hole.

The show was previewed at The Wardrobe Theatre and then we took it to The BikeShed in Exeter (now closed) and Old Joint Stock in Birmingham.

After the festival we are hoping to do a Spring 2020 tour culminating in taking it to London. The ideal venue is Soho Theatre, so watch this space!

Definitely go and see Sh!t Theatre Drink Rum With Expats at Summerhall. Their theatre company is also two powerful women making amazing theatre and we love their work. We will be supporting our fellow Bristolians, The Wardrobe Ensemble, who are bringing their new show, The Last Of The Pelican Daughters, to The Pleasance Beyond. They are our friends and contemporaries who also started out with us at The Bristol Old Vic Young Company. And finally, go and see The Guilty Feminist at The Pleasance Courtyard. I was very excited to meet Deborah Frances-White at a party and she was very encouraging about our show. She was the one to suggest we take SAID AND DONE to Sweet Venues as she thought it would fit in well there.