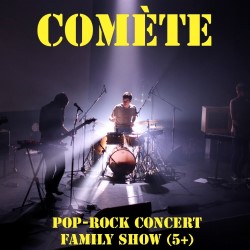 “We are always surprised when children leave their parents to come near the stage and jump to the beat of the music! They sing with us, it’s great!”

WHAT: “It’s never too soon to break out the Clash, never too late to submerge in the Beatles. And in between, float on Air, glide with Hardy and strut the Strokes! Covers and compositions blend into a true rock music awakening, a live show for curious kids and nostalgic parents sure to have you all singing, dancing, even screaming… from ages five and up! Comète is a group of pop rock musicians used to the biggest stages, here to share with your youngsters their personal rock galaxy!”

It is our first time with the company at Edinburgh, it’s so much fun for us to come and play a whole month in the same town and being part of this crazy festival, taking time to discover all that charming places, the special atmosphere of the town and the people from Edinburgh.

It’s our first Fringe Festival and we are very excited about it!

We are always surprised when children leave their parents to come near the stage and jump to the beat of the music! They sing with us, it’s great!

Our show allows children to live a «real concert», so that they discover and experience pop rock music through experimentation rather than evocation. To show (by putting the children in visual contact with the different instruments that characterize rock music: the drums, the bass, the electric guitar, the keyboards), to hear, to feel the power of music.

So we thought up, developed and created a real «rock concert». Sharing with children the pleasure of rock songs that we listened to at their age, the ones that pushed us to become musicians and write our own compositions. The diversity of our musical tastes ends with a profusion of rock movements from the last 30 years, which children can discover without filters or boxes: pop music, electronics, hip hop, … Similarly, we have chosen different languages (French, English, German) to show how different instrumental and vocal sonorities are at the heart of rock. As for the musicians, they all sing (even the drummer), to let people know that anyone can become a musician, if they want it and work towards it. In addition, forming of a rock band is based on a sense of the collectivity.

From the first performances, in schools and anywhere public, children, parents and teachers have taken part in the concert by singing, clapping hands or jumping to the beat of the music. Or have listened intently during quieter songs. When classes returned to their schools, the children would sing «La musique Automatique», «Da da da», etc. The teachers then testified to the pleasure they had in finding and singing some of the songs in class, the pleasure they had in sharing them together. Mission Accomplished for us: we gave them a taste for music.

In addition, we have paid particular attention to fully respecting auditory and visual safety stan- dards. We have specifically employed a sound engineer who accompanies us and ensures com- pliance with the new standard of 85 decibels.

Our Belgian’s friends are taking place at Summerhall with FrontX: dance/theatre show about how atypical individuals transcend their difficulties through their artistic practice.