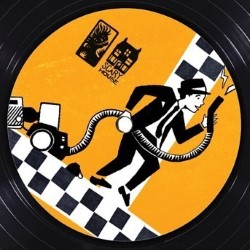 “It will be a nostalgic trip for adults and be a funny, scary and anarchic show for children.”

WHAT: “The 1980s! Ska music pulses and young Ashley creates havoc by getting lost in a wild, imaginative world. When Jedi battles and forest adventures go too far, will their hard-working mum resort to the scariest threat of all? Accompanied by an original ska soundtrack and stunning video animation. A Complicité and Polka Theatre Co-Production. Directed by Complicité Associate Catherine Alexander. Based on the book by Nigel Gray and Michael Foreman. ‘A new Complicité show… is a ticket to another world’ (Time Out). ‘Arguably the country’s best theatre company’ (Times).”

WHERE: Pleasance Courtyard – Pleasance Beyond (Venue 33)

Complicité was last in Edinburgh with The Encounter, directed and performed by Simon McBurney, at the International Festival in 2015. We won the Herald Angel award that year. In 1985 we took More Bigger Snacks Now to the Fringe and won what was then called the Perrier Award for comedy. We were the first theatre production to win the award. We can’t wait to see what happens this year!

We’ve been touring the globe with different shows playing at the likes of Sydney Festival, Dutch National Opera and the Barbican. But, the biggest thing we’ve done in terms of scale in the last 9 months was creating a dance piece with 200 self-identifying women in London and Hong Kong. ‘Everything that rises must dance’ was created by choreographer Sasha Milavic Davies and composer Lucy Railton. The piece is a celebration of female movement and the way women have moved throughout history.

Complicité is an international theatre company based in London led by Artistic Director Simon McBurney. We create work that strengthens human interconnection, using the complicity between performer and audience that is at the heart of the theatrical experience. Complicité works across art forms, believing theatre, opera, film, installation and community art can all be sites for the collective act of imagination. I’ll Take You to Mrs Cole! is a co-production between Complicité and Polka Theatre (the UK’s leading children’s theatre) adapted and directed by long-term Complicité collaborator, Catherine Alexander. It will have its world premiere at Pleasance this summer.

I’ll Take You to Mrs Cole! by Nigel Gray and Michael Foreman is about a hard-working single mother from Barbados and her child (Ashley), who live in a flat in a grey British city. When the child’s imaginative play gets a bit too wild and their tidy home is trashed, Mum playfully threatens to take her child to Mrs Cole, a chaotic neighbour with a dirty house and lots of kids. Adapter and director Catherine Alexander says “In 2016 Complicité asked me if I had any projects brewing and I suggested creating a show for families with young children. As a happy single mum and a child of divorced parents, I wanted to make a show that celebrated solo parenting. This is a story about cultural difference and fear within communities and the transcendent power of children’s ability to imagine and play. I am setting the show in Coventry at the height of two-tone music: this was the soundtrack to my early teens and gave my generation a sense of hope that racism could be challenged. I especially loved The Specials, The Beat and Ian Dury and the Blockheads and eventually, I saw them all play live.

The actors, sound designer Ben Grant and I are writing songs for the piece that are influenced by these artists. This show will have the energy of a gig combined with visual storytelling and exquisite original animation by Amber Cooper Davies. It will be a nostalgic trip for adults and be a funny, scary and anarchic show for children.” The show will tour the UK in 2020 and 2021. Watch this space.

At Edinburgh International Festival we are also presenting a work-in-progress of The Happy Tragedy (15-17 Aug) of Being Woke by Clint Dyer, directed by Clint Dyer and Simon McBurney. It’ll be a rare opportunity to see our work in the development phase. It’s a killer theatre programme at the Pleasance this year. Alongside I’ll Take You to Mrs Cole! they have our co-production with The Wardrobe Ensemble The Last of the Pelican Daughters.

They also have Bryony Kimmings’ I’m a Phoenix Bitch, Rhum and Rhum and Clay’s The War of the Worlds and This Egg return with dressed. All brilliant shows! Elsewhere, we’re looking forward to Tim Crouch’s new play Total Immediate Collective Imminent Terrestrial Salvation and Forced Entertainment’s To Move in Time.