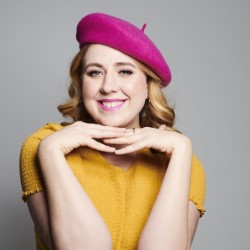 “I discovered Disney Vloggers, it’s the best thing! People who go the Disney World every day in full costume and go around the parks. It is amazing and has totally made my year.”

WHAT: “Helen enjoys a drama. She’s her mother’s daughter, taking a small situation, blowing it up, then getting upset that it’s out of her control. Just like all the best reality TV. At the same time, she dreams of being a sweet angel handling any drama with grace. Who doesn’t overthink everything and plan for how she will have all eyes on her at the right moment. Highly anticipated debut hour from the 2018 BBC New Comedy Award Finalist. As seen and heard on BBC Three, Comedy Central and Radio 4.”

It is not my first time at all, 10 years ago I was with Pleasance for the first time working as crew. That was my first time at the Edinburgh festival. Since then I have gone up as an audience member and eventually a performer. Last year I was part of the Pleasance Reverse and I am so excited to return with my first ever show. MY FIRST SHOW. AHHHHH.

I discovered Disney Vloggers, it’s the best thing! People who go the Disney World every day in full costume and go around the parks. It is amazing and has totally made my year. I guess I also started a Podcast with dreamboat comedian Rosie Jones, Daddy Look at Me. It’s the Disney Vlogs that really stand out.

‘Little Miss Baby Angel Face’ is an exploration of my love for tragic situations and the relationship with my Mum.

My mum and I are two sides of the same coin. My mum currently has ghosts in her house and thinks in a past life she was on the ‘Titanic’, where I wrote and performed a monologue about being sexually abused and performed it at school (TOTAL LIE & also VERY creepy)! In reality, her Mum ran a ‘drama school’ from their house (from when she was small) and clearly, the drama continued outside of her work!

Sincerity is what the show tackles and my completely inability to be sincere when it is most required.

The show is directed by the brilliant Phoebe Bourke and it’s been such a pleasure and dream to work with her. I have previewed in around the UK festivals and hoping after Edinburgh to perform it all over.

So many. Heidi Regan and Micky Overman never fail to make me laugh. Sunil Patel and Jordan Brookes are comedy gods and of course I cannot forget the sweet comedy angel Rosie Jones.