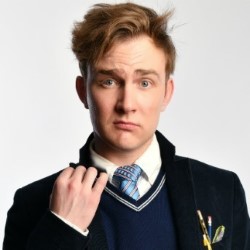 “…performing in South Africa, Australia, New Zealand and the Bahamas. Am I sounding smug yet?”

WHAT: “Tom was sent to all-boys boarding school at age six. A world where ‘day kids’ are shunned and girls? None existent. But when, in his second last year the school decided to go co-ed, everything was to change. The total Fringe sell-out, star of Comedy Central’s Roast Battle and ultra-privileged Tower of London resident, Tom Houghton lifts the controversial lid on the incubators responsible for producing many of our country’s leaders. With a little help from 00s pop sensation Busted. ***** (The New European), ***** (One4Review), **** (Daily Telegraph), **** (Chortle).”

Oh no. I’m an old mule now. I did 9 with The Noise Next Door and now this is my 3rdsolo one. I slip back into this month like it’s my favourite pair of slippers.

I’ve had a few big ones. Comedy central roast battle against my best matey Lauren Pattinson was super fun. But then so has performing in South Africa, Australia, New Zealand and the Bahamas. Am I sounding smug yet?

Its written, directed and performed by me. It’s about the public school system, how it effects the kids who go to them and how they then go on to dominate the power jobs of our counties. I believe the public schools are the beginning of the split in our society. If we are aiming for equality then there needs to be a discussion as to what role they have in our future.

As much variety as possible. I have friends I could suggest. Gareth Waugh, Ryan Cullen, Elliot Steel. But go and see a play, some dance, street performers. Then go home and have a long look in the mirror and question your own reality.