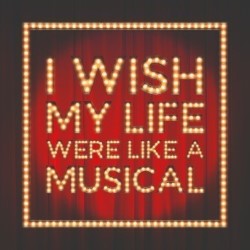 WHAT: “Boasting a West End Wilma Award, a Broadway World Award nomination and a raft of five-star reviews for its recent London run, this comedic musical revue reveals everything you could want to know about being a musical theatre performer… if only there were any who’d admit it. Covering the journey from wide-eyed drama student to brattish diva, or past-it chorus member, or bitter has-been (or never-was), this show lifts the lid on awful auditions, debilitating dance routines, mid-performance mishaps, and backstage backstabbing – plus those magical moments that make it all worthwhile.”

This will be the first time that I am at the Fringe for its entire duration and that I am actively involved in overseeing a show (my previous visits having simply entailed popping along to shows in which my writing has been included… and taking in as many other productions as possible!).

The biggest thing has been preparing the show for Edinburgh. And, as part of that, there was the task of looking through the 1,300 applications for our four roles. And we are now able to announce that the illustrious line-up will comprise James Hume, Felix Mosse, Charlotte O’Rourke and Charlotte Anne Steen. Many London and nationwide audiences will be familiar with them from their performances in leading roles such as Javert in Les Misérables, Alex in Aspects of Love, Sophie in Mamma Mia!, and Sherrie in Rock Of Ages, respectively. Understandably, we are delighted.

I Wish My Life Were Like a Musical presents everything that you could possibly want to know about being a musical theatre performer – if only there were any who would dare to admit it!

When I started giving performances of my comic songs (after years of merely singing them on the radio, in my guise as comic songwriter/performer on Radio 4 and the World Service), I thought it would be fun to have a couple of West End musical theatre performers as special guests – and equally fun to write one or two numbers about life as a musical theatre performer for them to sing. The songs seemed to resonate both with the artists and with our audiences. At a similar time, when a theatre piece of mine was being performed on a cruise, I was struck by the frequency with which passengers would ply our cast with questions about their lives and careers, and seemed surprised to learn that – contrary to what the glorified, idealised version of the industry that songs such as There’s No Business Like Show Business might suggest – they were not chauffeured from front door to stage door, put up in five-star hotels around the country, and living a life of glitz and glamour. Far from it. And I wondered whether there might be an appetite for a show about musical theatre performers, following their lives and presenting their experiences “warts and all”, which could be revelatory to “lay people”, relatable to those in the industry, and hopefully amusing for both.

Developing the show proved an enjoyable challenge. Writing the lyrics gave me the opportunity to seek accounts from many performer friends of their most memorable (and funniest) real-life experiences that related to the subjects that I had in mind. The music, meanwhile, often provided me with a chance to indulge in my love of creating original melodies that are fully or partly comprised of snatches of famous songs thematically linked to my own. (For example, most of the opening number is made up of short musical quotations of well-known opening numbers.) What results is intended to be a show with humour and heart, which takes a sardonic yet affectionate look at “the business”, and celebrates the performers who audiences spend evenings in awe of yet whose lives they rarely gain a glimpse into from the moment the curtain falls.

I Wish My Life Were Like A Musical’s premiere run took place in Spring 2018 at the Crazy Coqs at Zedel in London. In the light of the enthusiastic reactions that it garnered from public and press alike, the production was swiftly revived for an extended run there in Summer 2018, which in turn led to a West End Wilma Award (for Best Cabaret) and a Broadway World Award nomination (for Theatrical Event of the Year). On the back of this, I am very excited that it is now coming to the Fringe, with a phenomenal cast of leading West End musical theatre artists and with award-winning director/choreographer Chris Whittaker at the helm. As for where the show’s journey will take it from there, who knows…? Watch this space!

I like the idea of the Inspiration Machine, which is being launched at the Fringe this year and which selects a show at random for the user to consider seeing. Or, for the more risk-averse Fringe-goer, Wallace & Gromit’s Musical Marvels will no doubt be worth a gander. I’m not sure it has much in common with I Wish My Life Were Like A Musical (apart from the word “musical” in the title), but I have to confess to being an ardent admirer of that dynamic duo and their genius creator Nick Park.