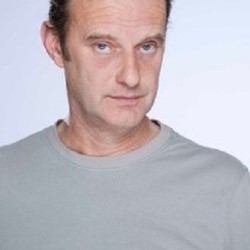 “I first came in ’83 in a very strange version of Tartuffe by Moliere. It was called Rock Tartuffe.”

WHAT: “Who is Robert Lemon Alackadaddy? Well he’s certainly a geezer that’s done many a thing. Come meet Phil Cornwell’s altered ego. One of the UK’s best impressionists; his cult appearances including Stellar Street and Dead Ringers. He’s also been in nearly all the Alan Partridge shows and films, and has voiced many characters on Spitting Image, Bob The Builder and also (his most famous voice) Murdoc in the Gorillaz! Book early! ‘Superb character skills’ (Comedy.co.uk). ‘A cult favourite’ (Guardian).”

I first came in ’83 in a very strange version of Tartuffe by Moliere. It was called Rock Tartuffe. Yes. It was. We were performing in a venue called The Hole in Ground. Say no more. Emma Thompson was doing her one woman show at the same place. I have returned on a good few occasions since in various extravaganzas, most recently doing a set of impressions in 2010.

I have become a father for the fifth time, with the birth of my daughter Maud. Spurs getting to final of The Champions League has to up there too, although not as momentous as Maud’s arrival.

My show is a one man calvalcade of glorious insanity. I dun writ it myself and it’s called Alackadaddy. It follows the wonderful mental meanderings of Robert Lemon Alackadaddy, an alcoholic in denial. A fantasist and man of literature and despair. He points out the poignant brevity of our existence on this orbiting globe we call earf. I have performed it on a handful of occasions. I’m looking forward to seeing where it will go.

I do know that Stewart Lee is up for a week I think. There is a comedian well worth seeing. I love his stuff. He has serious cojones.