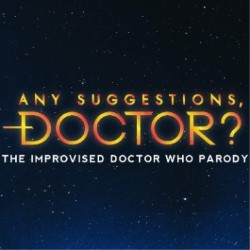 “…we couldn’t be more excited to add a TARDIS to the stage, expand our radiophonic workshop and move into an even bigger venue.”

WHAT: “The Improvised Doctor Who Parody is back! Travel anywhere in time and space with a live radiophonic workshop, on-stage TARDIS and a collection of hilarious improv comedy performers! Travel on an adventure made entirely from your suggestions and be home in time for tea. Allons-y! ‘An excellent Fringe choice for Whovians young and old’ **** (BroadwayWorld.com). ‘The Doctor would approve’ **** (BroadwayBaby.com). ‘A talented cast, sharp improv skills and a slick live soundscape’ (Comedy.co.uk). Nominated for Best Show in the Comedian’s Choice Awards 2017.”

I’ve been going to the fringe now for 14 years now, though I’ve only, been performing in them since 2012. I’m at the stage where I’ve nearly lived an entire year in Edinburgh without ever having actually moved there, which is simultaneously kinda cool but also deeply worrying when I consider how much that has cost.

Well, this might sound a little sycophantic, but getting confirmed that we can move into Pleasance Dome. It meant we could finally press the button on getting our own set built, working with bigger and better tech and taking on new members. The past year has been a huge upgrade for the show, and to be honest it’s been a large chunk of my year.

It’s an improvised Doctor Who parody that is completely made up every single day! The idea came out of watching episodes of Doctor Who and longing to write our own episodes, but then realising we had all spent over 3 years improvising together. From there it was just a case of watching every episode of Doctor Who we could find, gathering the team and finding a musician. Every year the show has grown, with our debut at The Great Yorkshire Fringe reassuring us it was absolutely worth pursuing., Since then we’ve done Edinburgh, Brighton, even a couple of London shows, and each time we’ve been delighted to make up new adventures and keep the troupe rolling. This is our 4th year together and we couldn’t be more excited to add a TARDIS to the stage, expand our radiophonic workshop and move into an even bigger venue. I’ve been producing and performing this whole time, and every year it gets both tougher and more exciting, and this year is definitely going to be our best yet.

If it’s improvised comedy they enjoy then definitely check out Silliad, some fellow performers who we’re great friends with improvising brand new myths and legends. There’s also the Dead Ducks, the University of York’s hilarious sketch troupe, and The Shambles, our Alma Mater and always a great source of new talent.