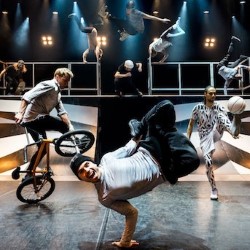 WHAT: “In this adrenaline-fuelled explosion of extreme urban sports, breakdance, music and theatre, ISH Dance Collective create breathtaking poetry in every single moment. Elements of Freestyle is about those redeeming seconds that make a complicated trick ultimately succeed; about the freestylers’ total focus, the ecstasy and feeling of complete and total freedom. In a spectacular fusion of breakdance, inline skating, skateboarding, freestyle basketball, BMX and freerunning, the audience discovers the artistry behind the trick. Exquisitely beautiful and heart-poundingly exciting, you simply will not believe your eyes. ‘Unbelievable… very special’ ***** (MusicalNieuws.nl). ‘Urban arts elevated to dance’ ***** (Theaterkrant.nl).”

No it’s not my first time. I visited it three times: the first time outside the festival, just checking some cool places/options where we could perform our show. The last two times during the festival to check out the awesome vibes from the massive crowd and shows.

I created another show called ‘Modern Samurai’ inspired on the movie ‘Yamakasi’ (first movie with the discipline parkour) with spectacular Breakdance and parkour.

I created another show called ‘Modern Samurai’ inspired on the movie ‘Yamakasi’ (first movie with the discipline parkour) with spectacular Breakdance and parkour.

When you’re there open your eyes and ears and the vibe will tell you where to go! Endless possibilities..:) Perhaps Showstopper! The Improvised Musical at Pleasance Grand and BalletBoyz: Them/Us at Underbelly McEwan Hall!